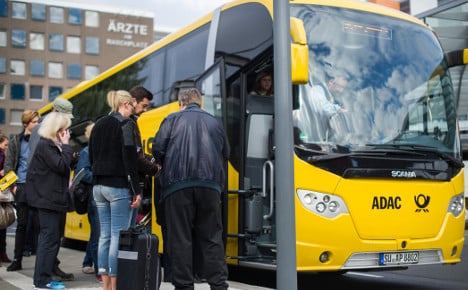 Drivers' association ADAC finally announced its withdrawal from its joint bus venture with Deutsche Post on Monday, putting an end to months of speculation.

With just eight percent of the market, well behind leaders MeinFernBus at 45 and Flixbus at 24, ADAC Postbus has been struggling.

Putting on a brave face, Post board member Jürgen Gerdes said his company would take over ADAC's 50 percent share of the joint venture and press on alone.

“Over the next year we'll be extending our network even further,” he said on Monday.

Nothing would change for customers of Postbus, he said.

The fact that competition for passengers has given even a big organization like ADAC cold feet is a sign of the times.

Companies rushed into the market after it was liberalized in 2013, as different players sought to grab their slice of the budget travel pie.

Huge rewards were on offer, as nine million people chose to travel by bus in 2013, while twice as many might take to the roads this year, according to the German Bus Operators' Federation.

Repeated strikes by train drivers and Lufthansa pilots would seem to have created the ideal conditions for bus companies in recent months.

But now, a year after the big bang, the smaller players are being crowded out and even big organizations are rethinking their positions.

“People are really playing hardball in this industry,” said Christian Fekeitja, who has taken over as insolvency administrator at DeinBus.de, which went bust over the weekend.

Feketija argues that it was price competition that ultimately put DeinBus out of business – and that's a game that only companies with deep pockets can play.

“There's no big investor behind DeinBus, it's an independent pioneer,” he said.

With just two percent of the market according to a study by management consulting firm Iges, DeinBus was never carrying enough passengers to make up for the low prices it had to charge to stay competitive.

Announcing bankruptcy was a sad move for DeinBus, a company founded by students whose legal victory over Deutsche Bahn in 2011 helped pave the way for the bus market to be opened. But compared with the market leaders, DeinBus and its recently bankrupt competitor city2city are minnows.

City2city has been making losses of €2.5 million annually – unsustainable for the level of market share it achieved.

“We're certainly not the last business that will close down” in the bus industry, a city2city statement said in October.

As the sector is winnowed down to fewer and larger players, though, prices may begin to rise for passengers.

And the Iges study into the bus market concurred, with the authors concluding that “in the medium term rising prices are to be expected.”