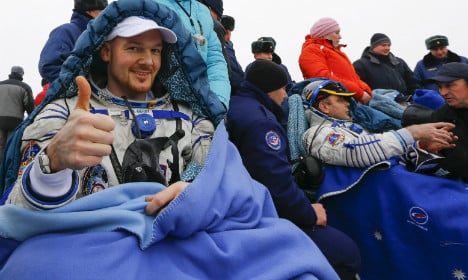 A three-man multinational crew of astronauts returned to Earth Monday aboard a Russian Soyuz spacecraft, after spending 165 days working together at the International Space Station, NASA said.

The three men smiled broadly from reclining chairs as medical personnel tended to them amid patches of snow on the barren steppe just northeast of Arkalyk, Kazakhstan, where they landed.

R-0: Touchdown! Earth smells amazing, it is good to be back on our #BlueDot pic.twitter.com/zVeuiuv9qE

Gerst felt good about his first trip into space, he said in Russian at the landing site, and thanked everyone for their support. Doctors were at the site carrying out check ups.

Gerst is scheduled to fly to Cologne on Monday.

Surayev flashed a V for victory sign while Wiseman pumped his fist as they waited to regain their land legs after nearly half a year of weightlessness.

"Everything was in the spirit of cooperation, so I think that everybody needs to learn and follow the example of the ISS crew members," Surayev said

"Let's try to live together side by side. This is the most important thing," he added.

Foreign minister Frank-Walter Steinmeier, who happened to be in Kazhakstan at the time of Gerst's landing, congratulated the astronaut on a successful mission.

"I hope that what the astronauts have seen from above – a world without  borders – will occasionally remind us that there are bigger problems than border conflicts that we are arguing about today," he said, adding that environmental concerns should be at the forefront.

While in space the crew traveled more than 112.7 million kilometres, NASA said.

Thanks to all of you for flying to space with me, it's been a blast. I am glad we did this together! #BlueDot pic.twitter.com/JDBmuXGF3p

The "bulls-eye" touchdown was executed amid low clouds and fog "following a flawless descent back into the atmosphere," according to NASA TV.

The spacecraft was pulled onto its side by its parachute upon arrival, which NASA TV added was not uncommon.

The US space agency said the "departure of Wiseman, Gerst and Surayev marks the end of Expedition 41," referring to their mission to the ISS to carry out equipment repairs, maintenance and experiments.

Surayev was on his second long ISS mission, having now spent a total of 334 days in space, while the other two astronauts were on their first trip.

The three men were pictured smiling and with their arms around each other before hitching the ride back home, undocking from ISS at 7:31 pm.

Another three-person crew remains on the ISS to "continue research and maintenance aboard the station" and will be joined by three more astronauts who launch from Kazakhstan on November 23, NASA said.

NASA lost its ability to reach the space station when the shuttle program ended in 2011 after 30 years.

The US space agency has helped fund private companies in a push to restore US access to the ISS.

In the meantime, the world's astronauts must rely on Russia's Soyuz spacecraft to get to the ISS and back, at a cost of $70 million per seat.

There are 15 country participants in the ISS program, though the US and Russia contribute the lion's share of funds for the project.