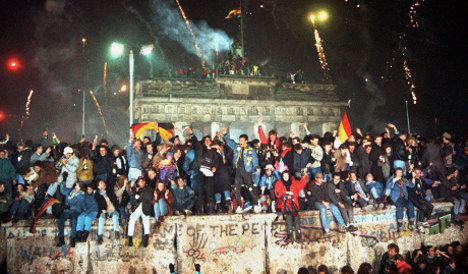 French military photographer Hendrik Pastor was on duty at Berlin’s Checkpoint Charlie on November 9th as thousands of people gathered at this pivotal point of the existing world order.

Something big was happening – but no one knew what. At 10pm the East German major at the checkpoint invited him onto the Wall with a guarantee of his safety so Pastor could record scenes from what proved to be “the biggest event since the end of the Second World War”, he remembers.

Finally he asked the officer why he was doing nothing about the mass of people straining towards the forbidden barrier. The reply still chills with its implications of a possible alternative scenario on this historic day.

“We are soldiers and we take orders – but we have no orders,” the major told him. “What we can do is start shooting. We can get the first 100 people but we are just 30 men and they are 6,000. What do you think the rest will do to us?”

“The whole thing could have turned into World War III, I still don’t know why it didn’t,” says Pastor, 65.

Chain reaction and a blunder

Across Berlin events had been set in motion that could not be reversed without  a full-scale, blood-swamped military crackdown.

But for all the confused spontaneity of the day, this was the culmination of months of developments in East Germany and the wider Eastern Bloc.

Slackening of border controls in some Communist states and ever-larger domestic protests in the GDR paved the way for the reconnection of a country that was formally split in 1949 and physically partitioned since August 1961.

The final nudge came with a premature announcement by authorities in East Berlin a few hours before the Wall was breached.

The GDR government wanted to defuse tensions by relaxing the system of emigration to West Germany and allowing 30-day travel visas. It was not intended to be an uncontrolled opening of the border and did not apply to citizens wanting to visit the West as tourists.

But at a chaotic press conference in East Berlin on November 9th, GDR Politburo member Günter Schabowski said the changes would take effect “to my knowledge … immediately”.

“When I read that out, they [security officials] still didn’t know anything about that at the border,” Schabowski said in a later interview.

Within a few hours hordes of people had gathered at the Wall demanding to be let through. Fearing a stampede, the guards opened the gates.

Mike Trobridge, a British student in Berlin on a university exchange, was at a concert near Potsdamer Platz when the singer shouted “Die Mauer ist weg!”, “the Wall is gone”. “We left and went straight to the Brandenburg Gate,” said Trobridge, 45, recalling how the East German guards initially controlled the situation using water cannons but then stood back at the critical moment.

“Although it was pretty exciting, I didn’t fully appreciate the full significance. If I had, I’d have got down off the Wall on the East Berlin side and gone for a stroll on the wild side. But it seemed to me more like a temporary blip and I was still afraid of the border guards.”

Thousands of people streamed into West Berlin, danced, drank, hugged, stood on the Wall and began assaulting it with hammers, pickaxes and drills. “It’s like witnessing an enormous fair,” German Chancellor Helmut Kohl gushed about the events in a phone conversation with US President George H. Bush on Nov. 10. “It has the atmosphere of a festival.”

The jubilant scenes were broadcast worldwide and dominated the front pages under headlines like “Revellers rush on hated gates” (The Guardian).

East German newspapers had little to say about it, though, with Berliner Zeitung and Neue Zeit running just small items about “new travel regulations”.

Neues Deutschland, the official Communist Party mouthpiece, buried the story beneath articles about December’s Fourth Communist Party Conference and “Information on the Policy of Renewal and the Party’s New Thinking”.

The recently appointed new East German leadership under Egon Krenz tried to avert the full unravelling of the system with promises of  more freedom, fair elections and a relaxed travel regime. But it was too little too late.

In December, the East German parliament revoked the leading role of the East German Communist Party (SED), and German reunification came a year later on October 3, 1990.

Meanwhile, after serving as a symbol of repression for almost three decades, the Berlin Wall took the brunt of the outpouring.

As thousands of people headed to Berlin from around the world to be part of history, American Keara Giannotti arrived a week after the Mauerfall from southern Germany to get her piece of the action – and the Wall.

“I know I was just a tourist and a trophy hunter, but I was also 19, rebellious, and really inspired to want to be a part of tearing down that  wall myself, especially after walking past memorials for the people who had been killed trying to get over the border.

“So we bought our hammers, which took some doing since many stores had sold out, and we chiselled away.  You could hear people hammering  everywhere!”

Like an army of ants, the trophy hunters and residents feverishly removed chunks and whole sections until the Wall, which quickly became a tangible indication of the GDR’s survival prospects.

“You couldn’t demolish it like that if you planned,” said Pastor of the damage to the 156-km barrier of concrete, fencing and wire.

“In three days it was a mess, you couldn’t take a photograph of it as used to be anywhere. It was over.”