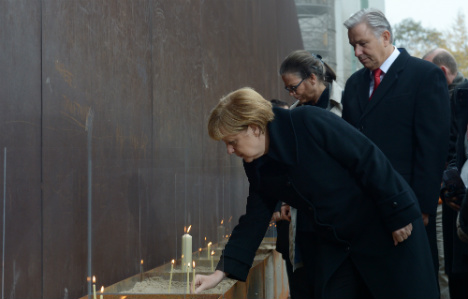 Germany on Sunday celebrated 25 years since the fall of the Berlin Wall, a milestone in ending the Cold War, by throwing a huge open-air street party at the iconic Brandenburg Gate.

More than a million people were expected in the reunited capital to see rock stars and anti-communist dissidents take to the stage amid fireworks displays to recall the peaceful breach of the despised concrete barrier.

The ugly scar the Wall once cut through Berlin has been marked by an art installation, a string of almost 7,000 illuminated white balloons tethered along a 15-kilometre (nine-mile) stretch of its former 155-kilometre path.

To symbolize the tumultuous day the barrier first cracked open on November 9th, 1989, the balloons will float into the sky at dusk to the stirring strains of Beethoven's "Ode to Joy", the anthem of the European Union.

Later the unofficial Wall anthem "Heroes", which David Bowie recorded in a studio near the barrier in then-West Berlin, will ring out across the city, performed by British singer-songwriter Peter Gabriel.

The anniversary celebrations started on a sombre note with a church service and ceremonies for the at least 389 victims of the border, who were shot, blown up by mines or otherwise killed as they tried to escape the East.

Chancellor Angela Merkel, 60, who grew up a pastor's daughter under communism, joined other dignitaries at a memorial at Bernauer Strasse, which saw harrowing scenes of people jumping from windows when the Wall first went
up in 1961.

"It took a long time and many people's suffering to make it possible for the Wall to fall, not just in Germany but also in Poland, Hungary, Czechoslovakia and many other countries," Merkel told reporters at the event.

"That's something we should remember on a day like today."

Unlike the 20th anniversary celebrations, when many heads of state and government flocked to Berlin, this time around the festivities are mainly a people's celebration in a city that has blossomed into a cultural hub and major European tourist destination.

More than a million people were expected to descend on Berlin over the weekend, said tourism group Visit Berlin.

One visitor who walked along the Wall light installation — called "Lichtgrenze" or light frontier — at sunrise Sunday was Benjamin Nemerofsky, 41, a Canadian artist who has lived in the city since 2001.

"The fall of the Wall changed many things in Europe, in Germany and in Berlin," he said.

"This is a city where you can see 20th century history at every corner. That's fascinating," he told AFP, describing himself as "bewitched" by Berlin.

Entertainment on Sunday will range from the Berlin State Orchestra under the baton of Daniel Barenboim to performances by East German rock band Silly and techno musician Paul Kalkbrenner.

The only foreign dignitaries are veterans of the era, chiefly the last Soviet leader, Mikhail Gorbachev, 83, whose "glasnost" and "perestroika" reforms kicked off the series of historic events.

Gorbachev — who remains highly popular in Germany, a reunited country since 1990 — warned Saturday that the world was on the "brink of a new Cold War", amid East-West tensions over Ukraine.

Also at the festivities will be Polish freedom icon Lech Walesa, 71, Hungarian ex-premier Miklos Nemeth, 66, and German President Joachim Gauck,
74, a former Christian pastor and rights activist in the East.

East Germany built the Wall, which it dubbed its "Anti-Fascist Protection Rampart", in August 1961 to halt a mass exodus of citizens to the West. First described as temporary, the Wall would stay for 28 years.

It came down after Gorbachev's Soviet Union loosened its grip on its satellite states and as pro-democracy movements in the East grew in courage and swelled in numbers.

In divided Germany, the landmark events of November 9, 1989 were sparked by a bungled televised press conference, in which a Politburo official, reading from an official statement, said off-handedly that East Germans could now travel to the West.

His words sent a flood of people rushing to a Berlin border crossing, where overwhelmed guards without clear orders from above eventually caved in to the people's will and threw open the gates, without a shot being fired.

The following hours, days and weeks saw Germans from both sides dance atop the long feared Wall and joyfully take it apart with hammers, chisels and pickaxes.

Germany was reunited within the year.