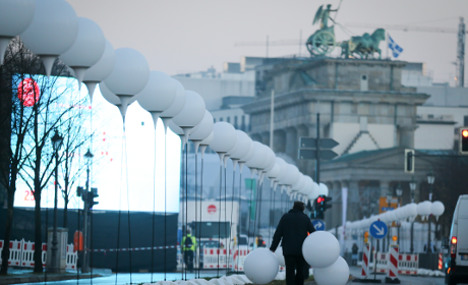 8,000 illuminated balloons are being put up around part of the former route of the Wall. Photo:DPA

Chancellor Angela Merkel, who grew up in communist East Germany, will lead three days of commemorations for those killed trying to flee the repressive state, leading up to a giant festival Sunday marking the joyous breach of Europe's Cold War division on November 9th, 1989.

"I think you never forget how you felt that day – at least I will never forget it," Merkel, 60, said in a recent podcast.
"I had to wait 35 years for that feeling of liberty. It changed my life."
The festivities under the banner "Courage for Freedom" will remember the peaceful revolution that led communist authorities to finally open the border after 28 years in which Easterners were prisoners of their own country.
Germany would reunite within the year, on October 3rd, 1990.
Compared to previous anniversaries, the organisation this time has been more grassroots, with Berlin embracing its image as an international capital of the arts.
Celebrations will begin with the launch of an ambitious installation featuring 8,000 illuminated white balloons pegged to the ground along a 15-kilometre stretch of the Wall's former 155-kilometre path.

The glowing orbs, which from above will look like a long string of pearls, are to be released on Sunday from their ropes and set free into the night sky, to the stirring strains of Beethoven's "Ode to Joy".
Dissident singer-songwriter Wolf Biermann, who was kicked out of East Germany in 1976 for his critical songs, will perform Friday in the Bundestag lower house of parliament, in a tribute to those who resisted the regime. The last Soviet leader Mikhail Gorbachev, whose "perestroika" and "glasnost" reforms helped pave the way for the Wall's fall, will later greet crowds at the former Checkpoint Charlie border crossing.
Gorbachev, 83, who is revered here for having refrained from a bloody crackdown on protesters in 1989, will on Saturday join former German foreign minister Hans-Dietrich Genscher for a debate about the legacy of those heady days, and the resurgence of tensions between Russia and the West.

That evening, Merkel will attend a memorial concert at Bertolt Brecht's historic Berliner Ensemble theatre opposite the former "Palace of Tears", where Easterners said goodbye to visitors returning to West Germany.
And on Sunday she will open a major exhibition on Bernauer Strasse, a street divided by the Wall that saw harrowing scenes of families and neighbours ripped apart overnight when the Wall went up in 1961.
Following a ceremony at the elegant Gendarmenmarkt square, at least two million people are expected to gather for a "citizens' festival" at the Brandenburg Gate, the symbol of German unity.
There, Gorbachev and former Polish president and freedom icon Lech Walesa, 71, will join German head of state Joachim Gauck, 74, a former pastor and rights activist in the East, and Hungarian ex-premier Miklos Nemeth, 66.
Entertainment will range from the Berlin State Orchestra under the baton of Daniel Barenboim to a fireworks display and performances by East German rock band Silly and techno musician Paul Kalkbrenner at an open-air party in the evening.
British singer-songwriter Peter Gabriel will perform the Wall anthem "Heroes", which David Bowie recorded when he lived in then West Berlin.
Although attendance is expected to be high thanks to mild autumn weather, a nationwide train strike may hinder many travellers.
The East German authorities built the Wall, which they called an "Anti-Fascist Protection Rampart", in August 1961 to halt a mass exodus to the West.
On November 9th, 1989, East German border guards, overwhelmed by large crowds, threw open the gates to West Berlin, allowing free passage through the detested barrier for the first time since it was built.
At least 389 people lost their lives trying to escape communist East Germany, according to an official toll, although victims groups put the figure much higher.
SEE ALSO: Seven famous quotes about the Berlin Wall