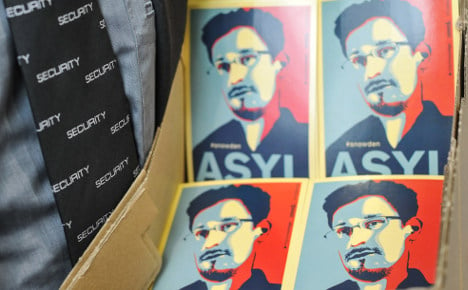 In response to a question from Die Linke (Left Party) in the Bundestag, the government said: “Edward Snowden has not made a renewed asylum application to the Federal Republic of Germany,” Tagesspiegel reported.

Snowden's original application for asylum was denied by the government in July 2013.

The government said that Snowden deserved no praise for his revelations about massive global surveillance by US National Security Agency (NSA) spies, in collaboration with allies including Germany.

“There is no consideration of this kind on the part of the government,” the answer said.

Die Linke politicians posed the question because Snowden's one-year asylum period in Russia will soon come to an end.

The government's answer has appeared the day after filmmakers held a premiere in Berlin for documentary Citizenfour, which tells the story of Snowden's work with journalists to bring his revelations of the NSA's mass surveillance programme to light.

“What happened in that hotel room in Hong Kong was a monumental moment in journalism,” documentary maker Laura Poitras told the audience on Wednesday about her meeting with Snowden in 2013.

The Snowden case demonstrated that we live in “scary times” for journalists and their sources, she added.

“Why must whistleblowers be the ones to show what governments are doing, and then have to pay such a high price for it?”

But Poitras says that the film is not a defence of Snowden.

“I didn't run the risks to make this film to convince anybody,” she said.

Poitras and Snowden worked with American journalist Glenn Greenwald, who was at the time working for The Guardian, as well as other media outlets including Germany's Spiegel, to publish Snowden's revelations.

A recent poll showed that Germans now believe foreign spying to be the greatest threat to their civil liberties.

Poitras, an American expat in Berlin, was the first journalist to be contacted by Snowden under the alias “Citizenfour”, and at first feared that it might be a government trap.

She had moved to Germany after she said she faced harassment from the authorities, being detained at US border crossings 40 times since she started her trilogy of films on post-September 11 America.

One of her films, on the Iraq war, had been nominated for an Oscar in 2007.

But Snowden's messages were “so detailed and specific” that she finally decided to trust him, she said.

Under Snowden's instructions she bought a new computer and used encryption programs to set up secure communications with the whistleblower.

He had previously tried to get in touch with Greenwald, but fell at the first hurdle of getting him to understand the necessary cryptographic procedures. Once the trio were able to meet, Snowden revealed that he had copied a huge cache of documents detailing NSA surveillance programmes while working for the spy agency as a contractor in Hawaii.

They showed that the NSA was gathering billions of ordinary people's communications from phone companies, social networks, email providers and others every day.

In Germany, there was particular outrage that Chancellor Angela Merkel's phone was tapped and that the NSA conducted industrial espionage on German companies.

British spy agency GCHQ and Germany's Bundesnachrichtendienst (BND) have worked closely with the NSA on its surveillance programmes, the leaks showed.

The German Parliament established an inquiry into the NSA revelations in March, which refused to hear evidence from Snowden – although it has heard evidence from other NSA whistleblowers including cryptographer William Binney.

The inquiry itself was reportedly the object of spying by an American double agent inside the BND, leading the German government to expel the CIA's station chief in Berlin in July.