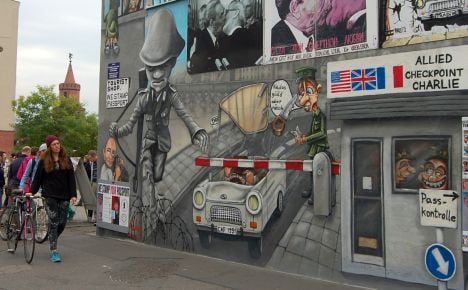 A mural of Schumann's and Meixner's escapes from East Berlin at the East Side Gallery. Photo: Nick Allen

The first known escapee after wire partitions began dividing Berlin on August 13th, 1961, was an East German soldier called Conrad Schumann. He leapt over the wire cordon two days later. His simple leap to freedom became one of the iconic images of the Cold War.

The first victim was 58-year-old Ida Siekmann, who was fatally injured on August 18th while jumping from a window at the border in Bernauer Street, Prenzlauer Berg.

But the full ruthless control of the frontier was shown to the world a year later when 18-year-old bricklayer Peter Fechter was shot through the pelvis by GDR guards while escaping. Fechter was left to bleed to death in view of hundreds of people on the western side.

“Everyone knew it was suicide to try to escape,” said former East German construction engineer Joseph, 63. “To do so would be like me trying to climb Mount Everest without training and equipment.”

But despite the dangers and stiff jail sentences for attempted Republikflucht (escape from the republic), many people still managed to flee in extraordinary style.

Direct line to the West

Twenty years later, in March 1983, Michael Becker and Holger Bethke fired an arrow on a fishing line from a fifth-floor attic in East Berlin to a house across the divide.

Bethke’s brother Ingo, who had escaped to the West eight years earlier, reeled in the line and a connected quarter-inch steel cable. Once it was attached to a chimney, the pair used wooden pulleys to zip across.

One of the escapees, Wolfgang Engels, who managed to get to West Berlin despite being shot, revisited the spot with The Local.

Brick up the mother-in-law

In May 1983, 20-year-old Austrian lathe operator Heinz Meixner drove a rented sports convertible clean under the 94-centimetre swing barrier at Checkpoint Charlie, having previously removed the windshield to lower the car’s profile by five centimetres.

His fiancée was hidden behind the driver’s seat and his future mother-in-law lay in the trunk as he approached the barrier manned by armed police officers. Then it was foot to the floor, with Meixner ducking at the crucial moment.

“I figured it would take [them] three seconds to draw their weapons once they realized what I was doing,” he later told West German authorities. “But I thought I could make it … Besides, we had 30 bricks behind Mrs. Thurau to protect her if firing started.”

In 1979 Hans Strelczyk and Gunter Wetzel built a hot air balloon engine from old propane cylinders while their wives made a balloon from scraps of canvas and bed sheets. On September 16th the two couples and their four children floated over the border at 2,400 metres.

But it was the tunnellers who racked up the most successes, with hundreds of people escaping beneath the Wall through Berlin’s soft sand and loam soil.

Around 70 tunnels were built over the years, many of which were betrayed or discovered by the Stasi secret police or were flooded because of the city’s high water table.

While most tunnels were narrow and cramped, the so-called Senior Citizens Tunnel in 1962 afforded the most dignified subterranean escape.

Led by 81-year-old Max Thomas, 12 people including several pensioners built a 32-metre-long tunnel in the southwest sector of East Berlin.

Starting inside a chicken coop, it took 16 days to complete and was 1.75metres tall, to allow them “to walk to freedom with our wives, comfortably and unbowed”, according to one of the diggers.

While most escapees settled quietly out of the limelight, some went on to even greater things.

The late doctor of physics Reinhard Furrer dug and escaped with 56 others through a 145-metre tunnel from East Berlin in 1964. He later trained as an astronaut and in 1985 became the first German to command a Space Shuttle mission.

Working from the West after his own escape in 1961, the instigator of that tunnel project and several others, Joachim Neumann, took his expertise to incredible new heights – or lows. Neumann later became a chief designer of the Channel Tunnel between Britain and France. As well as its many fortifications the border was guarded by young conscripts. These were drafted mainly from eastern regions because they had limited access to western TV and radio and were less likely to question their task.

Overall, around 500,000 soldiers were stationed on the Wall and inner German border during its 28-year existence. Some were brought to trial after 1990 for firing on escapees but were usually given a suspended jail sentence if convicted.

“Generally there is no view [among them] that they did something wrong,” said Stefan Weinert, a documentary film maker whose new work Die Familie looks at the impact of the deaths of people killed trying to flee East Germany.

“They say, ‘those were my orders, I couldn’t have done anything else, I was a victim myself.”

“They were old enough to have a rifle and know what they were doing,” objects Heiko Kliem, whose father was fatally shot in the back by a guard in 1970 after taking a wrong turn off the highway and passing near a border installation. “There has been no justice.”

Still in the Wall’s thrall

Escapees spent years coming to terms with the sudden change in their destiny, and many  lived in the GDR’s shadow for a long time after.

“Only since November 9th 1989 have I felt truly free,” the wire-jumping soldier Schumann said later. He committed suicide while suffering from depression in 1998.

SEE ALSO: All of The Local's Berlin Wall stories