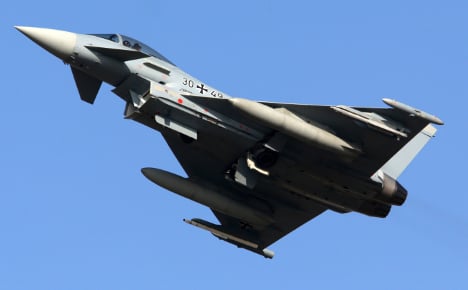 A German Eurofighter. Photo: DPA
The two Eurofighter jets from Germany's Luftwaffe intercepted a group of Russian planes, including fighter jets and their escort.
The German pilots spotted two MiG-31s, two Su-34s, one Su-27 and two Su-24 attack planes, Latvia's military said.
Germany's Eurofighters were scrambled from the Amari base in Estonia where they are stationed as part of a Nato mission, The Aviationist reported.
They stayed with the Russian formation for around 25 minutes after they were spotted at around 3pm. "Nato radars detected and tracked seven Russian combat aircraft," a German military spokesman told The Local.
"They got in contact with the Russian jets, just to do a visual check, took a picture and that is all."
On Wednesday morning, two Nato F-16 jets were also scrambled to intercept five more Russian planes over the Baltic, Latvia's military said.
Nato has stepped up its forces and air defence in the Baltic in the face of Russian aggression since the Ukraine crisis.
Germany now has four Eurofighters and 160 soldiers in Estonia as part of Nato's Baltic Air Policing Unit.
In September, Russian jets violated Swedish airspace as the country continues to test Europe's air defence capabilities.
A Russian spy plane also flew into Estonian airspace last Tuesday.
SEE ALSO: German exports to Russia collapse by a quarter