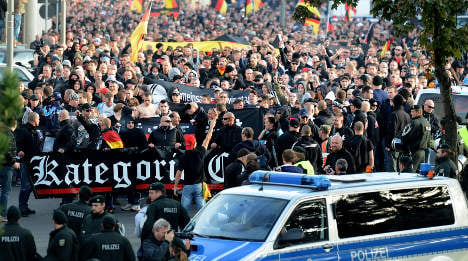 More than 4,000 people gathered in Cologne on Sunday. Photo: DPA
The scale and violence of what was billed as an anti-Salafist demo caught police by surprise on Sunday. Forty-five people were injured in fighting around the "Hooligans against Salafists" march, 44 of them police officers, and 17 people were arrested.
Police used tear gas and water cannon to try to control more than 4,000 people who took to Cologne's streets.
Far-right protests are not unusual in Germany, but the size of the Cologne march was. Under an anti-Islamic banner, organizers managed to unite different far-right and football hooligan factions.
The far-right scene hailed the protest as the "Miracle of Cologne" and protesters are set to mobilize in other cities this month under the motto, "Cologne was just the beginning".
A similar demonstration is planned in Hamburg and Berlin on Saturday November 15th.
One far-right blog announced the Hamburg demonstration would start at the city's central train station at 2pm and boasted 3,000 people had already confirmed their attendance on Facebook. "It's carrying on!" the blogger wrote.
The "Hooligans against Salafists" group is also planning a demonstration on November 15th in Berlin at the Brandenburg Gate. City politicians are looking to ban the protest.
German police union DPolG also fears the violence seen in Cologne will spread.
DPolG president Rainer Wendt told dpa news agency: "It will not be restricted to Berlin, Hamburg, Cologne. It is possible in all cities."
SEE ALSO: 'We can't allow a proxy war in Germany'