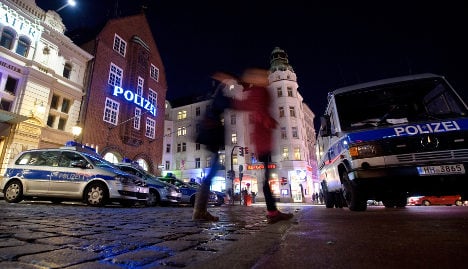 The "Davidwache" police station on the Reeperbahn. Photo: DPA

The first boy, aged 15, was attacked at 3am, on Herbertstrasse  by two men with batons. He suffered injures to his head and face and was taken to hospital.

At the same time, two 16-year-old refugees were beaten up in the centre of the red light district, the Reeperbahn, by five people.

One was beaten with a baton, kicked and stamped on until he was unconscious. The boys were found by police and taken to hospital.

The third attack took place at 7am on Saturday, also on the Reeperbahn. The boy was found near the "Davidwache" police station with blood coming from his head. Police are still establishing his identity but said in a statement on Sunday that he too was a young refugee.

The fifth victim was also attacked on the Reeperbahn, this time at 2.26am on Sunday.

The 15-year-old boy was encircled by five men and hit with a baton.

As he fell to the floor he was hit and kicked. Police said he suffered injuries across his entire body and was taken to hospital.

Police did not comment on a motive behind the attacks, but according to the Hamburger Abendblatt the attackers were pimps who had been targeted before by young refugees stealing from them.

The pimps had reportedly warned police that they would take matters into their own hands if officers couldn't stop the thefts.