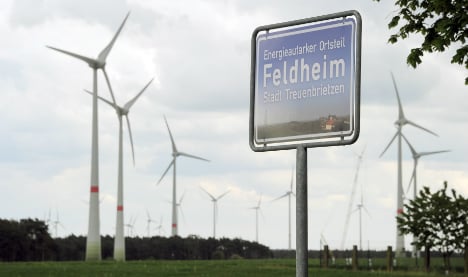 The village of Feldheim. Photo: DPA

The hamlet near Berlin is Germany's first to have left the national grid and switched to 100 percent local, alternative energy, swearing off fossil fuels and nuclear power decades before the rest of the country plans to near the same goal.

Electricity now comes from a wind park towering over its gently rolling fields and reaches homes through Feldheim's own mini smart grid.

More than 99 percent of the wind power is sold into the national system, along with electricity from a solar park on a former Soviet military base.

As winter nears, people here will heat their homes from a biogas plant powered by local pig and cattle manure and shredded corn, while on the coldest days a woodchip plant will also burn forestry waste.

The villagers took bank loans and state subsidies to build the system, in partnership with green power company Energiequelle, but say it is paying off as electricity and heating bills have been slashed.

Feldheim no longer pays for 160,000 litres (40,000 gallons) of heating oil a year, said Werner Frohwitter of the local energy cooperative.

"This money is no longer going to Arab sheiks or (Russian President) Vladimir Putin," he said at the village 80 kilometres southwest of Berlin. "This money is now staying right here."

Depending on who you listen to, Germany's "Energiewende" or energy shift is a bright green vision for a zero-carbon future or a reckless gamble that will drive Europe's biggest economy against the wall.

It is certainly Germany's biggest infrastructure project since World War II and its greatest national challenge since reunification 25 years ago.

Europe's major export power plans to switch off its last nuclear plant in 2022 and by mid-century meet 80 percent of electricity demand with renewables, up from one quarter now.

Windfarms have mushroomed, especially along the gusty northern coast, and solar dishes now cover homes, barns and factories — all encouraged by state-guaranteed returns for 20 years.

But amid the rapid and often chaotic build-up, the energy shift has been hit by delays, cost overruns and unforeseen consequences.

For one, green surcharges have made power bills the second highest in the EU, worrying businesses that compete internationally, especially as the economy is losing steam.

"The cost of the energy transition for the economy and consumers will continue to rise," Germany's Chemical Industry Association warned this month.

There have also been major technical hitches to building giant offshore windfarms, and local protests have slowed to a crawl the building of high-voltage power lines between Germany's windy north and industrial south.

The biggest irony has been that the energy shift, intended to slow climate change, has driven up carbon emissions for the past two years.

The problem lies in the fickle nature of renewables. When the sun doesn't shine and the wind doesn't blow, conventional power is needed to fill the gap – ideally with relatively clean and flexible gas plants.

However, utilities – which have taken a beating as a glut of renewables has slashed wholesale power prices – have shuttered some under-utilised gas plants and filled the gap with cheaper and dirtier coal.

This trend has worsened with the collapse of Europe's market for carbon emissions, which was designed to put a cost on environmental damage, but no longer makes it expensive for companies to pollute.

As a result, while clean energy took the top share at 27.7 percent in the year's first nine months, it only narrowly beat lignite coal at 26.3 percent, according to the Agora research institute.

Chancellor Angela Merkel this month urged reforms to Europe's emissions trading scheme, saying that putting a price on carbon is "the central instrument to fight climate change in Europe".

A range of other future tools are being debated to save the Energiewende, still a broadly popular project backed by all political parties.

Ideas range from paying gas plants to remain on standby for when they are needed, to better home insulation and more electric cars, to creating large energy storage systems using water reservoirs and huge batteries.

Tiny Feldheim, ever proud to be at the cutting edge, has set up an electric car power station and ordered a 10 MW lithium-ion battery from South Korea.

When the giant device arrives next year, it will give the village a 48-hour emergency supply, but that is not its main purpose.

For most of the year it will be rented out to a regional power company as a buffer against grid fluctuations.