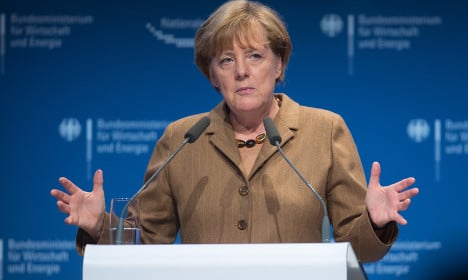 Merkel suffers from Wortfindungsstörung at the IT summit in Hamburg. Photo: DPA

At an IT summit in Hamburg on Tuesday, Merkel needed to phone a friend – if only she could remember what exactly that thing is called that would allow her to do so. She had forgotten the word  for "landline" – Festnetz in German.

While talking about a joint project between Deutsche Telekom and the government called "Network Alliance Digital Germany" which was launched this year to transform Germany into Europe's "digital leader", Merkel's speech turned into real-life satire.

She said: "It (digital Germany) is not going to work if we can't transport our data, so it's good that there is a network alliance, that there is a timetable for building network infrastructure and that we have the right mix, as Herr Höttges (head of Deutsche Telekom) just said, of the three Fs – frequency, support (Förderung) and… what was the third?
Merkel turned to the Telekom boss at this point. "He doesn't know himself any more," she said to great laughter. "It was really simple."
She also turned to her digital minister, Alexander Dobrindt, for help, who also didn't know what one of the building blocks of his "Network Alliance" was.
Struggling to speak without notes, Merkel then made the connection. "Landline. Landline!" she said to laughter and applause.
Why landlines are being touted by Germany's digital leaders as part of the country's online future remains unclear.
But in forgetting the word for something she claims to be passionate about, Germany's media were clear in their criticism of the chancellor.
Spiegel was not amused by Merkel's forgetfulness. "Our politicians draw a blank on the digital agenda," it wrote.

Germany's cabinet aims to be the most digital-friendly ever and appointed Dobrindt as digital minister earlier this year who, at the time of his appointment was yet to discover Twitter. Politicians often struggle to keep up with their aspirations, especially when it comes to the online world.