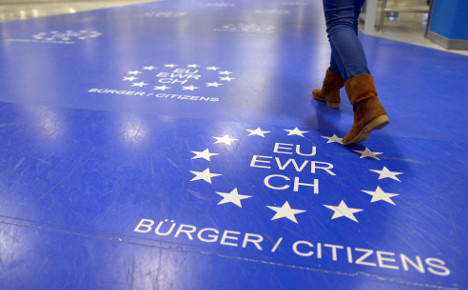 EU-wide, more than 2.3 million first residence permits were handed to non-EU citizens in 2013, statistics released on Wednesday by Eurostat showed.

Germany granted the fifth largest number of permits overall, but its rate was also disproportionately low in relation to its large population.

In terms of numbers of permits issued according to population size, the leaders in the EU last year were Malta and Cyprus, with 24 and 13 permits issued per thousand citizens respectively.

Germany also mainly issued permits to people for family reasons (41 percent of total) rather than for employment purposes (13.9 percent).

In contrast to Germany, Poland issued 51 percent to people for employment purposes, compared to just one percent for family reasons and eight percent  for education.

"The OSCE [Organisation for Security and Co-operation in Europe] has said that Germany has the least stringent immigration rules among the EU member states but this has not led to more work migration," migration expert Dr Steffen Angenendt at the German Institute for International and Security Affairs (SWP) told The Local.

The reason was that liberalized regulations that took effect last year had not been sufficiently advertised by the government, either to immigrants or to potential employers in Germany, he said.

"The government did not advertise the fact that there is a new immigration policy very much abroad or internally. Maybe the topic was too sensitive."

One of the few active steps to make the new regulations known was a web campaign launched by the Economics Ministry called Make it in Germany.

However, Dr Angenendt points out that "Germany is still the country with the most migration" when intra-EU movements are taken into account.

Around 300,000 people migrated to Germany in 2013 from the rest of the union, many of them part of large-scale "crisis immigration" from economically troubled members like Spain, Italy and Greece.

Germany comfortably exceeded the EU average for first residency permits issued for education, tying in with its tendency to grant them to people already residing in the country, often on educational programmes.

The tendency was also supported by a survey published last week by the Migration and Refugees Ministry which showed that almost three-quarters of non-EU immigrants with a degree wanted to remain in Germany for at least ten years after studying here. These are often prioritized in the issuance of residence permits.

Under the EU's “Blue Card” residency permit programme, of 11,000 cards allocated in Germany in 2013 around 7,000 went to migrants already resident in the country.