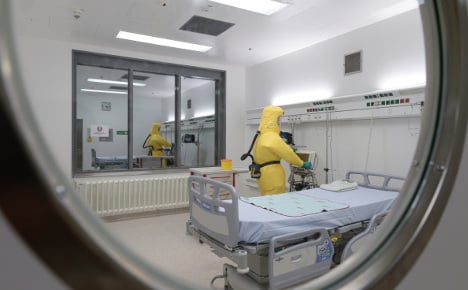 “We were shocked by how much spending and how many man-hours were needed to ensure the care of a single patient,” said Stefan Schmiedel of the Bernhard-Nocht clinic in Hamburg.

“Two, at most three such sick patients,” could be treated in the port city, he said.

Hamburg was the site of Germany's first Ebola success story, after a 36-year-old World Health Organisation (WHO) epidemiologist recovered from the disease without the use of experimental new medicines.

But that case was extremely difficult due to the large number of complications developed by the patient, even after the virus was under control.

The bill for the man's whole course of treatment, which was covered by the WHO, reached around €2 million, six times higher than initially planned. Health Minister Hermann Gröhe had said recently that the country would be able to deal with 47 cases in beds spread across seven treatment centres.

At the time, he said that it was “a much larger number than any of our neighbours can provide”.

But the experience with the three patients so far sent to Germany from West Africa by the WHO suggests that he may have spoken too soon.

Infectious diseases chief Bernhard Ruf of the St. Georg clinic in Leipzig, which treated a Sudanese UN official who eventually succumbed to the illness, said that there was “no way” any clinic could treat more than two Ebola cases.

And René Gottschalk, head of the Frankfurt public health service, said that more than 30 specially-trained carers were needed to take care of a single patient each day.

"The limiting factor is personnel,” Timo Wolf of the Frankfurt Uniklinikum agreed.

Germany's only remaining Ebola patient, a Ugandan doctor, is being treated in Frankfurt.

Other infectious diseases specialists now have a breathing space, as there are no plans for more people with Ebola to be treated in the country.