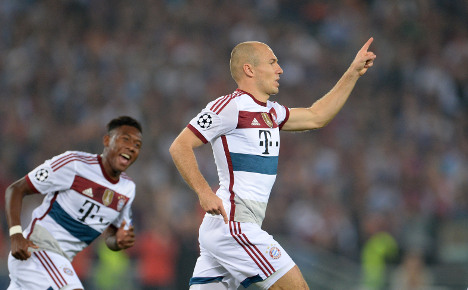 Bayern have now become the first German team ever to score seven goals at an away game in Italy and take the lead in their group with nine points, compared with four for Roma and just two for Manchester City.

As for Roma, they suffered their heaviest-ever Champions League defeat in front of over 60,000 spectators at the Stadio Olimpico – despite their second-place standing in the Italian Series A league with no goals conceded in five out of seven games.

“Especially in the first half, we played phenomenally,” said Thomas Müller, who scored with a penalty in the 36th minute despite a knee injury at the start of play.

There was a high-pressure atmosphere in the stadium, with booing directed at Mehdi Benatia, who transferred to Bayern at the beginning of the season, from the Roma fans.

Arjen Robben and Philipp Lahm were the first to make a successful attack, dodging past sluggish Francesco Totti and Ashley Cole in the 9th minute.

Mario Götze and Thomas Müller were the next German pair to break through in the 23rd minute, quickly followed by Robert Lewandowski, who deftly headed in a cross from Juan Bernat in the 25th.

As Roma lost heart, Robben was once again able to outrun Cole to make it 4-0 in the 30th minute, and a handball by Kostas Manolas a few minutes later gave Müller a penalty chance that he didn't let slip.

By half-time there was no more jeering from Roma fans – or if there was, it was drowned out by the jubilant voices of the Germans.

Bayern lost their dominance to a determined Italian counterattack in the second half, with the post and Manuel Neuer stopping two chances from an aggressive Gervinho.

A foul against Müller earned Vassilis Torosidis a yellow card from referee Jonas Eriksson before Gervinho finally slipped a ball past Neuer after 66 minutes.

But there was no hope for Roma as Bayern once again kicked up a gear and returned to the attack, with further goals from Frank Ribery and Xherdan Shaqiri in the 78th and 80th minutes.