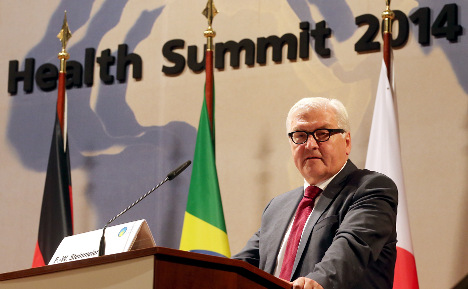 Germany's Foreign Minister Frank-Walter Steinmeier opened the conference on Sunday with his own ideas.

"One could possibly conceive of something like the White Helmets. Not an organisation that is always there, but a pool of experts, of doctors, of nursing staff, that one can call upon in these kind of crisis situations," he said at his key note speech.

At a press conference, Steinmeier added that a coordinated effort is most important to stem the spread of the Ebola outbreak.

"This epidemic is threatening entire structures, entire states that could fall apart … in a situation where these structures are urgently needed. Now, no crops are being harvested, public life is at a still stand," he said.

The British government is encouraging EU states to give €1 billion against the epidemic that has already claimed the lives of more than 4,500 people in west Africa. Steinmeier has already said that Germany is able to contribute €102 million in aide against Ebola.

The disease is expected to further dominate discussion at the EU Summit in Brussels this coming weekend.