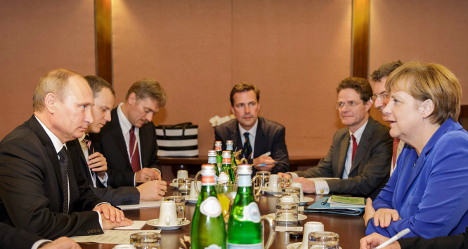 The talks came ahead of a summit on Friday over Ukraine where pro-Russian separatists have been battling government troops.

“Russia must make the decisive contribution to de-escalation [of the Ukraine crisis],” Merkel said before meeting Putin at the Asia-Europe Meeting (ASEM) in Milan, noting that 300 people have died since a ceasefire in the east of the country was declared.

Calling on Russia to fully implement an agreement between the sides in Minsk in September, she said Russia must withdraw all its weapons and establish a proper border between the countries under the leadership of the Organization for Security and Co-operation in Europe (OSCE).

“There is no doubt that the violation of the territorial integrity of Ukraine and the violation of international law have consequences in our immediate neighbourhood,” Merkel said on Thursday. “Therefore, sanctions are an important part of our approach to solve the Ukraine conflict.”

But she added sanctions were not an “end in itself”. “We continue to seek dialogue with Russia.”

The Thursday night talks with Putin started at 23.15pm as he was late arriving in Italy and lasted for two-and-a-half hours.