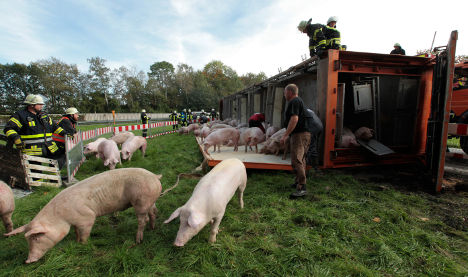 The pigs were rounded up the fire service after the crash. Photo: DPA

Thirty of the animals either died on impact or had to be put down on the scene in Neu-Ulm because of their injuries, police said.

The remaining pigs were checked by vets and put in a replacement truck by more than 40 firefighters and continued their journey to the abattoir in Ulm.

The vehicle had been heading to the slaughterhouse from Nuremberg.

It tipped over when the 40-year-old driver, who suffered minor injuries in the crash, took a curve too fast, police said.

According to police, his van was poorly loaded. Only ten pigs were on the lower section of the truck while the other 115 were on the top.