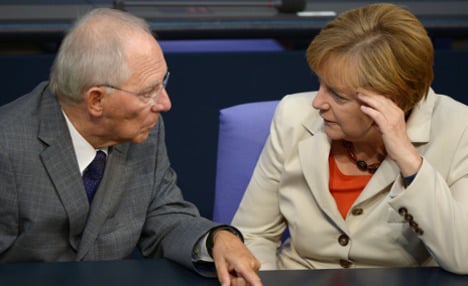 Finance Minister Wolfgang Schäuble and Chancellor Merkel are under pressure over the economy. Photo: DPA

Finance Minister Wolfgang Schäuble’s bid to pull Germany's budget out of the red for the first time since 1969 has become “a sacred cow” which his fellow ministers should question, said Carsten Brzeski, chief economist in Germany for banking and financial services company ING.

“Germany should not be stuck in an either-or mindset of choosing between spending and saving, ” Brzeski said. “There is enormous potential to reduce subsidies and reset priorities – by investing more in areas such as infrastructure, which will stimulate short-term growth.”

Brzeski said a focus on austerity should not be implemented as “religiously” as Schäuble and his supporters would have it, but public and private investment to stimulate growth should be prioritized.

“Germany has been too complacent,” said Brzeski. “It has forgotten to introduce reforms as it got caught up in saving the Eurozone and being too satisfied with the strength of its economy.”

Within the Social Democratic Party – the junior coalition partner in the German government – dissent against Germany’s regimen of fiscal discipline has emerged.

If Germany experiences recession next year, the SPD's deputy parliamentary leader Carsten Schneider said he would be seek to increase spending. He told the Süddeutsche Zeitung on Tuesday: “The only thing that would be immediately effective is a broad communal investment program."

Continuing austerity after an economic downturn would worsen the situation, he said.

German growth forecasts were cut by a third on Tuesday from 1.8 percent to 1.2 percent for 2014 and 1.3 percent in 2015, instead of the previous forecast of two percent.

By some measures, such as the Centre for European Economic Research (ZEW) Indicator of Economic Sentiment, struggles are ahead for Germany's economy.

The indicator for investor confidence on Tuesday showed a drop of 10.5 points in October 2014 to -3.6 points, the first negative showing since Novembers 2012.

Geopolitical affairs and the weak economies of Germany’s fellow Eurozone members are not helping, according to ZEW President Professor Clemens Fuest.

With GDP falling by 0.2 percent in the second quarter of 2014, Germany is technically just one quarter away from a recession.

Poor  figures such as a drastic fall in industrial production, declines in consumer confidence and German competitiveness, topped off with weaker than expected job figures have put pressure on Germany's government to loosen the purse strings.

But others say there is little reason to panic, and even less reason to ditch efforts to balance the budget.

Matthias Kullas, from think-tank the Centre for European Policy (CEP), told The Local: “We have to wait and see whether Germany really does go into recession, and whether it would be more than a short-term problem.

"At the moment there is no need for additional public deficit. Balancing the budget is still a good goal.”

He said Germany had enough “automatic stabilizers” to keep its economy steady, such as unemployment benefits to keep consumption afloat, in case jobs were impacted.

Kullas argued Germany was not saving itself into a recession, but that newer measures such as lowering the retirement age to 63 have dented the country’s finances.

The Christian Democratic Union’s Steffen Bilger told The Local he still stood firmly behind the anti-deficit programme, and that future spending should be less concentrated on social benefits once the budget has been balanced.

“The path we have taken is still the right one. We are also convinced that other countries in the Eurozone should still follow the path of reform,” Bilger said. “It is important for Germany to set priorities correctly: the first priority is still the balanced budget. Afterwards, it should be more about investment into the future than expanding the welfare state.”