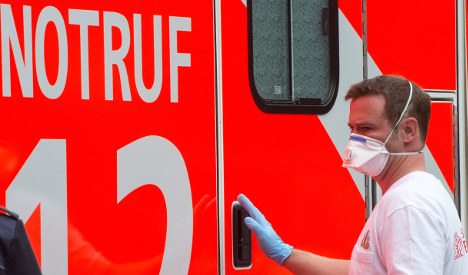 There was also an Ebola alarm in Berlin in August. Photo: DPA

The Gabiko pub on Paulsborner Straße in Wilmersdorf in west Berlin was sealed off by 20 firefighters, a spokeswoman told The Local.

They had received a call at 5.20pm that one of the bar’s customers was suffering from Ebola-like symptoms.

But it soon emerged the caller was fine and was believed to be playing a prank, the fire service said.

When they arrived the man from Nigeria was no longer in the pub. They found him at home and took him to hospital.

"He wasn’t ill and he hadn’t been away on holiday," the spokeswoman said.

The fire service said it was the first Ebola prank they had received in Berlin.

In August emergency services were called out to a suspected Ebola case in Prenzlauer Berg which turned out to be malaria.

Police will now decide whether to charge the prank caller with wasting time and make them pay the costs for the call-out.

According to the Berliner Morgenpost the costs could run into a five-figure sum.

The Morgenpost reported that all of the bar’s customers were also checked for signs of the illness which has killed more than 4,000 people since breaking out in West Africa earlier this year.

Meanwhile in Hamburg, the central station was closed off on Monday morning when passengers alerted the emergency services to a 15-year-old from Mali vomiting repeatedly on a train.

Medical staff rushed to the scene in protective gear to investigate, but found that the boy had not travelled to Africa recently enough to have contracted the virus, the Hamburger Morgenpost reported.