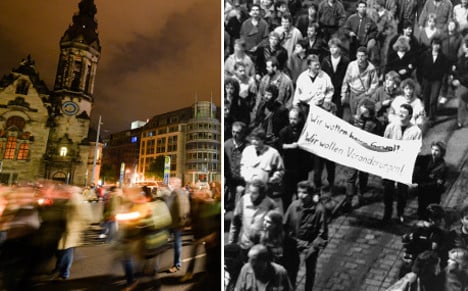 European leaders and former dissidents joined locals in a day of celebrations culminating in a reenactment of the iconic march in the eastern city of Leipzig.

On Thursday at 5pm thousands gathered inside and outside the Nikolaikirche in the centre of Leipzig – a focal point of the protests – to mark the anniversary.
All the talk was of what might have happened if those 70,000 didn't go out into the streets on October 9th 1989.
"It was a miracle, just a miracle," said one man, that shots were not fired and the revolution was allowed to progress peacefully.
"We wanted our freedom, freedom of movement, freedom of expression and freedom for our 18-year-old daughter." Erhard Lorenz, 72, who took part in later demonstrations after October 9th told The Local.

Many Leipzigers, including Erhard and his wife Heidemarie were too afraid to go out onto the streets that night.

They had just come back from Leningrad where they celebrated their 25th wedding anniversary to find a city of fear.

Doctors and hospitals had stocked up with blood and bandages. No one expected the East German security services to hold their fire.

With a teenage daughter aspiring to be a primary school teacher, the Lorenzs were torn between fighting for a better future for her and keeping the family safe.

And the courage of the 70,000 who braved the October night so they could speak, read, travel and work how they wanted, shook the communist regime and still amazes the Lorenzs today.

“We were afraid of being shot,” Heidemarie, 71, said. “We stayed at home. But after that we took part in all the demonstrations.”

“The atmosphere in demonstrations after October 9th was electric and peaceful,” another Leipzig woman who did not wish to be named told The Local.

The Lorenzs agreed. “No one expected things to move as fast as they did. We were not marching for reunification.”

But now that they can celebrate their golden wedding anniversary 25 years later in a reunified Germany, they said: “We are very happy. We were happy to be a part of it.

"Now our daughter teaches in Bavaria. Before we were not allowed to travel to the West together.”

The ceremonies came one month to the day before the reunified capital marks a quarter century since the communist authorities threw open the despised barrier in Berlin.
In that momentous autumn of 1989, successive Mondays saw mounting demonstrations against the Stalinist state.
The peaceful protest in Leipzig of 70,000 people on October 9th that year was met with stunned disbelief from the East German authorities and Soviet troops.
It proved a turning point after months of unrest which had sparked fears of a bloody crackdown as seen in Tiananmen Square in Beijing that June.
German President Joachim Gauck, who was himself a pro-democracy pastor in the communist East, called the night of October 9th, 1989 "magical" and paid tribute to the demonstrators' courage.

"They were familiar with the arrogance of power – an order to shoot would in no way have been unthinkable," he told a ceremony at the city's Gewandhaus concert hall.
"But they came anyway – tens of thousands overcame their fear of the oppressors because their longing for freedom was bigger."
Gauck said the "young demonstrators in Hong Kong" today demanding more democratic rights were acting in the same spirit.
He was joined by his counterparts from Poland, the Czech Republic, Slovakia and Hungary, as well as former US secretaries of state James Baker and Henry Kissinger, who was born in Germany.
The opening of the Berlin Wall on November 9th, 1989 brought the long-demanded liberty to travel for Easterners and would usher in the end of the regime, and Germany's reunification the following October.

James Baker III, who was the top US diplomat from 1989 to 1992, called the Leipzig rallies the "beginning of a march to freedom that didn't stop until there was freedom for the people of the GDR and of other captive nations of Central and Eastern Europe".

“It achieved a goal that we in the West had articulated for 40 years," he said on Thursday.

Baker spoke of an “extraordinary and unyielding” desire of people to be free and praised Leipzig for helping to ensure the Cold War ended with a whimper rather than a bang.

“It was one of the most profound demonstrations in world history," he told those gathered inside and outside the Nikolaikirche.

But he warned that many former Soviet states were now experiencing "angst and anxiety" over Russian military action in Ukraine.
"I don't think we're going back into a full Cold War situation. I sure hope we're not," he told reporters.
"But I would remind you that for 15 years after 1991, Russia and the West were very closely cooperating. During those 15 years, we had a Europe that… was whole and free, and I don't know why we can't get back to it."
No support, no survival

And Baker said in a talk to media outlets including The Local that the speed at which the GDR collapsed took even the White House by surprise.

“It (October 9th) was only one month to the day that the Wall came down.

"Events moved very fast in those days. We were very aware in the US of what was happening here in Leipzig."

But he added: “We were somewhat surprised by the rapid collapse and decline (of the GDR).”

It showed how a state which doesn’t enjoy the support of its people “cannot be expected to last”, Baker warned.

”No one expected it to happen as quickly as it did,” US Ambassador to Germany John Emerson added.

But reliving the events of 25 years ago, Baker stressed the reunification of Germany was a step which could not be taken for granted, despite the successful protests in Leipzig.

“When the Wall came some down some were reluctant to talk about reunification, including in the West,” Baker said.

He later told a crowd of thousands inside and outside Leipzig’s Nikolaikirche that the US overcame those who didn’t want Germany to unify. “The Soviets were very reluctant to see a unified Germany in Nato,” Baker added.

And responding to reports the US government had promised the Russians that Nato would not expand eastwards as a condition for their tacit support for German reunification in 1990, Baker said: “It is simply not true. (They were) never told it (Nato) would not extend.”

SEE ALSO: How 12 words helped bring down the Wall
Tom Bristow with AFP