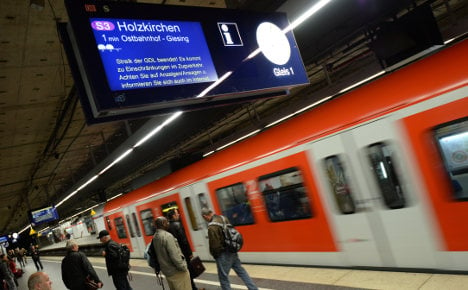 A sign on the Munich S-Bahn informs passengers of the end of the strike. Photo: DPA

“In the course of the morning we'll try to return to a stable if less frequent timetable in regional and S-Bahn traffic,” Deutsche Bahn said in a statement.

“In long-distance services there will be further cancellations and delays which could last throughout the day.”

The train company said that there would be a particularly limited service in major cities including Berlin, Hamburg, Munich and Stuttgart, but also in the states of Schleswig-Holstein, North Rhine-Westphalia and Hesse.

Delays are expected until at least midday.

The cause of the traffic problems is the large number of trains out of position following the industrial action.

A Deutsche Bahn spokeswoman said that there weren't too many problems with stranded passengers during the night.

“Travellers were well informed, so things remained calm at train stations,” she said.

Deutsche Bahn deployed additional staff from the beginning of the strike to inform passengers about alternative transport.

There is also still information available on their website about ongoing delays and cancellations.

The GDL union, which represents train drivers, is campaigning to represent conductors, on-board chefs and clerks in wage negotiations.

They are also demanding a five percent pay increase and a cut of two hours to the length of the working week for their members.