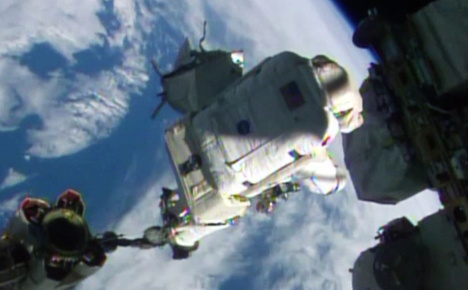 Gerst, 38, posted to the ISS by the European Space Agency, left the space station with NASA's Reid Wiseman at 12.30 GMT and remained outside for around six hours.

In the run-up to his excursion 400 kilometres above the surface of the Earth, Gerst tweeted to his 160,000 followers in typical lighthearted style.

However, his handlers on the ground were keeping a close eye on their charge.

"This isn't a 'space jaunt' but a painstakingly planned and physically very demanding mission," Volker Schmid of the German Air and Space Travel Centre (DLR) in Cologne said.

That didn't stop Gerst from taking some amusing photos and posting them to Twitter later.

The two astronauts were moving a failed cooling pump to an external storage platform just outside the Quest airlock module, a difficult job given the 350-kilo weight of the unit.

Gerst was then due to replace a light on a television camera located on the Destiny module.

The next task for the astronauts was to install a Mobile Transporter Relay Assembly, which can shift gear and supplies on rails along the space station's backbone.

NASA's Barry Wilmore, who arrived at the ISS on September 25th, was operating a robotic arm to manoeuvre Gerst during the spacewalk.

"Hello to all the space fans in Germany," Gerst said when he re-entered the ISS after the operation.

He is the third German to have performed a spacewalk after Thomas Reiter in 2006 and Hans Schlegel in 2008.

This repair job was originally planned for August but had to be delayed when the astronauts found a fault in one of their spacesuits.

"I had reviewed everything down to the smallest details. Throwing away the plan after that was a huge adjustment," Gerst said at the time.

However demanding it was, Gerst was unable to hide his excitement about the experience when he returned to his Twitter feed once safely aboard the ISS.

I do not have words to describe what we did today, but this photo gives a pretty good impression! @astro_reid #EVA27 pic.twitter.com/yApwfMJ7fJ

Geophysicist Gerst has been working on the ISS since May and will return to Earth in early November.