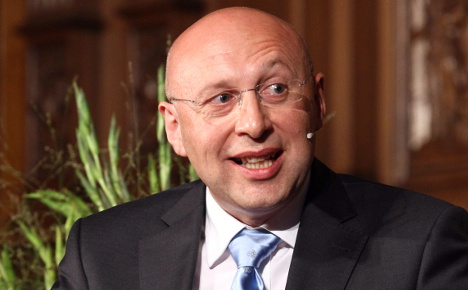 Hell, a German citizen, won the prize alongside Eric Betzig and William Moerner "for the development of super-resolved fluorescence microscopy".

Working separately from Betzig and Moerner, who worked together, Hell discovered a way to surpass the current limitations of the light microscope to create a new way of looking at cells and bringing microscopy into the nanoworld.

Until their research, optical microscopy was held back by the limitation that it would never obtain a better resolution than half the wavelength of light.

But using fluorescent molecules, the prize winners overcame this limitation, bringing optical microscopy down to the nanoscale.

It means that scientists can track tiny molecules inside living cells which they could not do before.

They can see how proteins in Parkinson's, Alzheimer's, and Huntington's disease move and can even track individual proteins as the cells divide inside embryos.

One laser beam makes fluorescent molecules glow and the other beam cancels out all fluorescence apart from a nano amount.

By scanning over the sample nanometre by nanometre an image is created far greater than with a light microscope.

The Nobel’s GPS may be predisposed to find its way to the U.S. (http://t.co/QWoY0ZTcKn) pic.twitter.com/gGCpZ6in8w

Announcing the award, The Royal Swedish Academy of Sciences said: "Today, nanoscopy is used worldwide and new knowledge of greatest benefit to mankind is produced on a daily basis."

Hell, who was born in Romania, got his PhD in 1990 from the University of Heidelberg and is now a director at the Max Planck Institute for Biophysical Chemistry in Göttingen.

The 51-year-old is also division head of the German Cancer Research Center in Heidelberg.