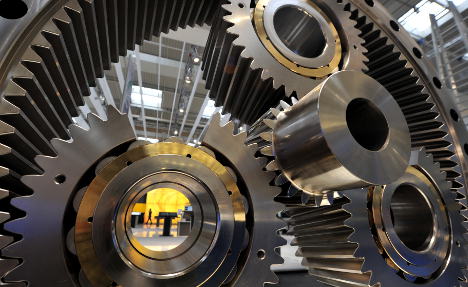 Grinding to a halt? Photo: DPA
According to data compiled by the economy ministry, industrial output contracted by 4.0 percent in August, after rising by 1.6 percent in July. It was the biggest fall for five and a half years.
Economists had been expecting a decline of 1.5 percent.
The drop was driven by a collapse of 8.8 percent in the manufacturing of capital goods such as cars.
Manufacturing output fell by 4.8 percent and construction output was down by 2.0 percent while energy construction output edged up by 0.3 percent, the ministry calculated.
It blamed the fall in August on the summer break, saying production output was affected "by the late position of the summer holidays".
But the ministry added the industrial sector as a whole was "currently going through a period of weakness".
The data comes a week after figures showed Germany's unemployment rate stagnated in September at 6.7 percent.
Consumer and business confidence has also faded in the country in recent months over concerns about the crises in Ukraine and the Middle East.
SEE ALSO: Unemployment rate stagnates in September