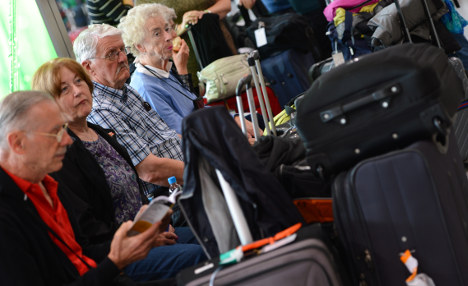 A stranded group of travellers from Vancouver, Canada, sit and wait at Frankfurt Airport on Tuesday. Photo: DPA

The 15-hour strike, from 8am to 11pm, by pilots’ union Cockpit is targeting long-haul journeys.

Lufthansa has put in place emergency measures to ensure that more than half of its intercontinental flights will still take off, the airline said.

“We are confident that we can carry out our emergency flight plan,” a Lufthansa spokesman said on Tuesday morning. Around 50 flights have been cancelled so far, mainly to North America, affecting 20,000 passengers.

A spokesman for Cockpit said the airport was quiet and added they wanted to hit their employers and not passengers.

Lufthansa's pilots are striking over changes to their retirement benefits being introduced as part of deep restructuring in recent years to bring down the German carrier's costs.

Pilots can currently take paid early retirement from the age of 55. They are fighting a plan by the airline to raise the minimum age and to involve pilots in the financing of their pensions.

It is the fifth wave of strikes this year. The first wave of strikes, which lasted for three days over Easter, cost Germany's national carrier around €45 million.