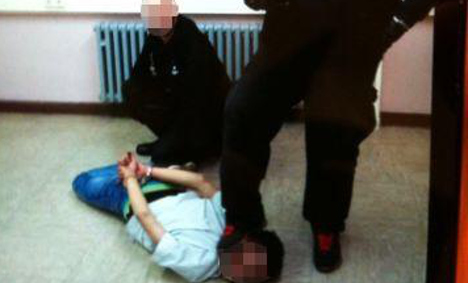 Authorities in North Rhine-Westphalia, where all six reported abuse cases took place, moved to tackle the scandal on Tuesday.

"Criminals are at work," he said. In future all security guards will have to be approved by the police and internal security service, the Federal Office for the Protection of the Constitution (BfV).

Of the three centres where abuse took place, two were manged by the firm European Homecare who sub-contracted security to a firm called SKI.

The scandal started in Burbach, where a video emerged of a refugee being forced to lie on a mattress soiled with vomit.

That sparked a police investigation and officers found a Whatsapp conversation on a security guard’s mobile phone containing a photo which showed another refugee being tied down with one guard's foot pressed against the back of his neck.

The two guards, aged 26 and 30, who were employed despite having a criminal record for offences including fraud, drugs and assault, are being investigated over the photo.

At a second asylum centre in Essen, security guards are accused of beating refugees. Police are investigating two cases of assault.

And at the third site in Bad Berleburg  two security guards, aged 30 and 37 are being investigated for grievous bodily harm after allegedly injuring a refugee. The men worked for a different security firm to the one responsible for the Essen and Burbach sites.

The images were compared to “torture” by some German media. Focus Online said the pictures would remind readers of Abu Ghraib – a prison in Iraq where US Army and CIA personnel tortured prisoners.

The federal government in Berlin has called for an urgent explanation into what went wrong in the refugee homes of Germany’s most populous state.

Pressure has also been heaped on the state’s interior minister Ralf Jäger.

Under the headline “Something is rotten at the interior ministry,” the Rheinische Post newspaper argued some of the blame lay with Jäger.

"That something has gone wrong in what is the interior minister’s area of responsibility has become brutally clear since the weekend," the paper argued.

Leader of the Green Party in the Bundestag, Katrin Göring-Eckardt, called for a “national refugee summit” to address the scandal.

“The rapid increase in the number of refugees has been evident for years. The government’s lack of action is now coming back to bite,” she told the Rheinische Post. All parties, federal, state, local and refugee organizations should come to the same table, she added.

The Tagesspiegel newspaper agreed, with an article arguing that authorities must take more responsibility for the number of refugees. “Wishing the problem away is inhumane,” it wrote.

Under the headline, “System of Shame,” Spiegel Online said the photos shone the spotlight on the private security industry which rarely came across in a positive light.

Germany takes more refugees each year than any other industrialized country. Around 200,000 refugees are expected this year, leading to accommodation shortages and overcrowding.

In Cologne authorities are moving refugees into an empty DIY store, while other refugees are housed in empty shipping containers and former barracks across the rest of the country.

Bernd Riexinger, leader of the opposition left party, Die Linke, called for a complete rethink of how refugees are housed. “We must step away from closed accommodation. It is inhumane and opens the door for misuse of authority.”