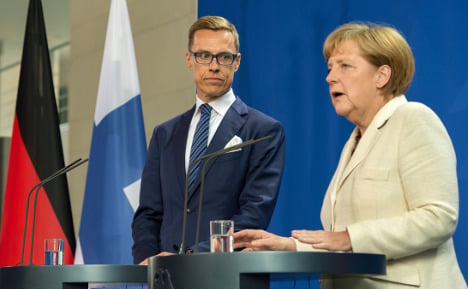 P { margin-bottom: 0.08in; } The EU depends on Russia for around 30 percent of its gas supplies, about half of which passes through Ukraine, Moscow's former Soviet satellite where pro-Russian separatist rebels have been fighting the Western-leaning government.

Merkel stressed that for now it was in the mutual interests of oil and gas power Russia – and the European Union and Germany – not to break their energy partnership.

"It's in the interest of both sides to cooperate," she told a Berlin joint press conference with Finland's visiting Prime Minister Alexander Stubb.

"Almost all European countries are linked to Russia regarding their energy supply … For Germany, this dependence on Russian gas is 38 percent, for other countries the dependency is 100 percent," she said.

However, she added that "of course we have to think about what we might have to change in the medium- to long-term as far as energy policies go if there is a continued violation of basic principles".

Regarding wider diplomacy to resolve the Ukraine crisis, she said Germany "will now do everything we can to get from the ceasefire to a reasonable situation in Ukraine".

"But this is far from assured," she said.

"Therefore, there is currently no way to remove the existing sanctions. Rather it is still necessary to continue the pressure within a reasonable political process."