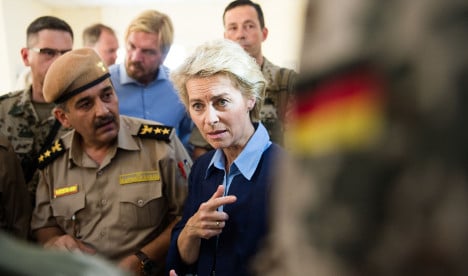 Ursula von der Leyen said in an interview that the Bundeswehr could not meet all of its pledges in responding to crises.

"With the airborne systems we are, at the moment, below the target figures announced a year ago on what we want to put at the disposal of Nato within 180 days in the case of an emergency," she told Bild am Sonntag.
Supply shortfalls on replacement parts for aircraft and the breakdown of naval helicopters are behind the problem, she said.
Last week, a small group of German military personnel sent to train Kurdish fighters battling Islamic State jihadists (Isis) arrived in northern Iraq days behind schedule due to technical problems with several transport aircraft.
The first German arms delivery to the region also arrived behind schedule.
Numerous Bundeswehr helicopters and transport planes are not fit for service due to technical defects and fighter jets and armoured vehicles are also beset with problems.

Von der Leyen, who last week visited northern Iraq, said the focus had been to concentrate on the "very good equipment" available for military operations, and less on the maintenance of stock at home.

"For example, the production of replacement parts has been reduced for years. Maintenance and inspections proceed slowly," she told the Sunday paper, adding this could in part also hold up modern equipment.
Working on improving things would take years and more money down the line, she warned.
"Developing stocks, faster repairs and the acquisition of better equipment will cost more money in the medium term," she said.
The German military is looking into leasing additional transport planes to help relieve its old Transall aircraft while it waits to receive A400M models and builds up a fully-operational fleet, she added.
On the need to raise military spending, the defence minister received backing from fellow conservative politician Henning Otte.
"From 2016, an increase of the budget will be necessary, for as much money as is necessary to fulfil all tasks," the conservative bloc's spokesman for defence matters was quoted as saying by Welt am Sonntag.
Kurds arrive in Bavaria
But Germany's Bundeswehr is helping where it can, and on Sunday it started training 32 Kurdish fighters from northern Iraq at an army school in Bavaria.
The soldiers will be trained in handling weaponry provided by the German military to support their battle against Islamic State jihadists, officials said on Sunday.
The fighters, who arrived on Saturday, will receive instruction on using Bundeswehr anti-tank Milan missiles, a defence ministry spokesman told AFP.
The training will takes place at an infantry training centre in the southern town of Hammelburg through Friday.
German military personnel this week are also due to start training Kurdish fighters in Iraq, Der Spiegel news weekly reported on Saturday.
That training is expected to run until the end of November, the magazine said.
Late last month Berlin announced that it was sending weapons to the Peshmerga Kurdish fighters in northern Iraq to help them fight off Isis militants who have seized large swathes of territory in Iraq and Syria.
SEE ALSO: How bad is the Bundeswehr?