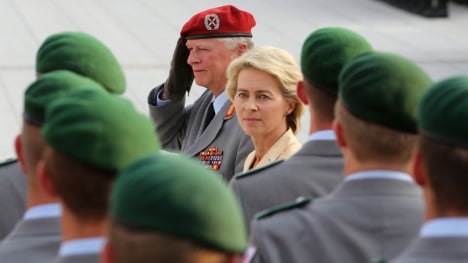 On Thursday at 10.30am a German military plane left Bonn for the Senegalese capital Dakar. It was carrying ten tonnes of supplies and a field hospital to help fight Ebola in Liberia.

This is the role Germany wants its military to play on the world stage – transporting humanitarian aid and where necessary military trainers and equipment to help in the world’s trouble spots.

But its military appears unfit for the task.

Last week, the first military trainers being sent to join the Kurds were delayed after their own Transall aircraft broke down. Much of the Bundeswehr’s equipment is not combat ready.

Defence Minister Ursula von der Leyen defended the Bundeswehr in the media on Wednesday, describing it as “highly capable,” although she admitted that some of its equipment “had a few years on the clock”.

“The Bundeswehr shows that it is operational every day, in 17 deployments all over the world,” she told Bild.

German units are still in Afghanistan. Others are providing air defence in Turkey, hunting pirates off the coast of Somalia, and training troops or providing logistical support across Africa.

But politicians' promises that Germany will use its troops and material to intervene abroad and provide disaster relief, as in Iraq and West Africa, are placing a heavy load on the already strained Bundeswehr.

“You've had this double discourse of people saying, on the one hand we want to be more active internationally, we want to contribute to international missions and peacekeeping, but they didn't provide enough funding,” Sangar said.

Chief of staff General Volker Wieker presented a report on the problems to parliament's Defence Committee on Wednesday.

It confirmed that just 24 of the air force's 56 Transall transport planes, which will be critical for the Iraq and West Africa missions, were fit to fly.

The air force is close to overload with its fighter planes also well under half strength.

Helicopters, too, are a weak point, with half the navy's fleet grounded and only 16 of 83 CH-53 transport helicopters flight ready.

There are also problems with the army's Boxer personnel carriers and the navy's frigates. Just 70 of the 180 armoured vehicles and seven of the 11 ships are in fighting condition.

“We had the case in Afghanistan and other missions that the troops on the ground didn't have the equipment to do their mission, but at the same time the military leadership didn't tell the politicians, 'well, if you want us to do our job we need parachutists, we need artillery, we need tanks',” Sangar said.

General Wieker told the lawmakers on Wednesday that “the conditions we depict [in the report] will last for a few more years,” saying that the military's only option was “creative management of resources that fall short” rather than asking for more money to deal with the problem.

“There's a tradition within the Bundeswehr not to become involved in politics, not to criticize,” said Sangar.

“It's often explained by World War II, but I think now it's part of an institutional culture where military leaders don't want to risk their careers by telling politicians 'we need more money'.”

Freed of such worries for his position, retired former Bundeswehr Chief of Staff Harald Kujat told the Stuttgarter Nachrichten that the military was feeling the effects of “chronic underfinancing”.

A rule of thumb for military spending is that 30 percent should go to upkeep, he said, but Germany only spends 16 percent.

Germany spent €48.8bn, 1.4 percent of GDP, on its military in 2013, well below the target of two percent confirmed at a NATO summit in Wales in early September. Sangar suggested that this was unlikely to change. “Military spending is not really something that's seen as vital by the German public – so long as there isn't something that is really critical to their perception of national security,” he said.

Even current events like Germany's role in the West’s confrontation with Russia over Ukraine have failed to produce such an effect.

“The priority of the current government is reducing the public deficit. All other objectives are less important, including formulating some kind of response to the perceived aggression by Russia,” Sangar said, noting that German military involvement has been limited to largely symbolic gestures like deploying four Eurofighters to the Baltic.

The good news for Germany is that its more active international allies like Britain, France and the USA are used to its habit of over-promising and under-delivering.

“The allies say, well, Germany has a tradition of not becoming too involved, not taking military risks,” said Sangar.

“I don't think it's going to be a huge problem for the foreign policy reputation of Germany, because the expectations are not that high.”

He told Deutschlandfunk radio listeners that “Germany is completely politically reliable" when it came to international crises, with politicians ready to commit the country's resources to tackling problems.

However, "the other things have to be improved,” was all he would say about the military technical failures hampering relief efforts so far.