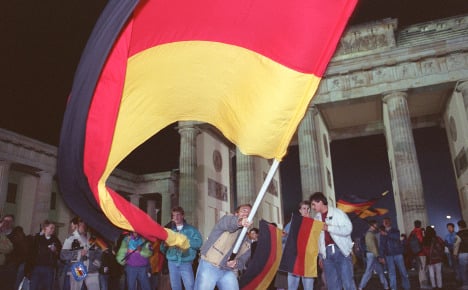 A quarter century after the fall of the Berlin wall, significantly more residents of the former German Democratic Republic (GDR) are happier with reunification than their western compatriots, a survey released on Wednesday showed.

A quarter of West Germans said that there have been more drawbacks, while in the East just 15 percent feel that reunification has been more disadvantageous than not.

East Germans said that the biggest advantages have been more personal freedom and increased travel possibilities. Economics, quality of living and career advancement opportunities all followed.

However, when it comes to the unified German school system, former GDR residents thought it was one thing their government got right. Almost four in five respondents said education had been better pre-1990.

Gender equality and the health care system had also been better, the majority of respondents said.

The federal government system of the Republic was considered better by 57 percent of East Germans; still, 19 percent preferred the GDR regime.

Young former East Germans were the biggest group of satisfied citizens: 96 percent of those aged 29 and younger said they were happy with one state.

Infratest dimap surveyed 1,000 Germans aged 14 and up across the country on behalf of German broadcaster MDR.

GALLERY: Everyday propaganda in the GDR

Despite the progress made, another report released on Wednesday by the government showed that the economy of Germany's ex-communist East is still struggling to catch up to the former West's.

Despite progress, Germany's five states that were behind the Iron Curtain until 1989 have a smaller economy with gross domestic product per inhabitant a third lower than in the west of Europe's top economy, it said in a report.

Iris Gleicke, the government's representative for the "new" states, said Germany's 1990 reunification had presented a historic one-off challenge in rebuilding the former East and now showed an overall "pleasing" picture.

Presenting the annual reunification assessment on as Germany gears up to mark the 25th anniversary of the Wall's fall in November, she said convergence of living conditions between East and West had "largely succeeded".

"In important areas like the economy or on the job market there still exists however a marked gap with the states in the West," she said in a statement. Gross domestic product per inhabitant in eastern states has more than doubled since the beginning of the 1990s but is still only around two-thirds the western level, the report showed.

It also pointed to the paucity of big companies moving to eastern Germany as a key factor in lagging worker productivity and said that convergence with the West had been slow in recent years.

It noted that the post-1990 eastern landscape had been shaped by small and medium-sized companies but that no DAX-listed firm had its headquarters in the former East.

And it highlighted that unemployment was 10.3 percent compared to 6.0 percent in western Germany, despite 2013 having seen the lowest annual average in the east since reunification.

A separate report, also released Wednesday, by the Ifo economic institute painted a similar picture. It said the economy of former East Germany had grown 20 percent between 1995 and 2013, compared to 27 percent in the former West.