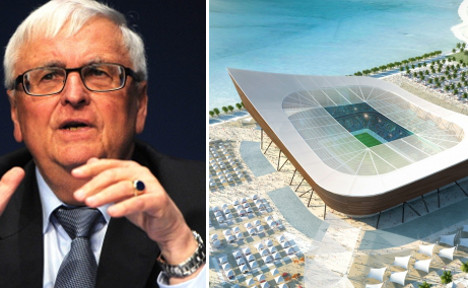 Theo Zwanziger and one of the planned stadiums in Qatar. Photo: DPA

Theo Zwanziger said that the Gulf state would lose the tournament as the risks to the players' and spectators' health would be too great in the tiny desert state's summer heat.

"Personally, I think that the 2022 World Cup will not be in Qatar in the end," the former president of the German Football Association (DFB) told Sport Bild Plus.

The average summer temperature in Doha is around 38C and can often approach 47C.

“Doctors say, and I had insisted on this point in the protocol, that they cannot guarantee a World Cup can be held in summer in these conditions," he said.

Qatar has said that games can be played thanks to cooling technologies being developed for stadiums, but Zwanziger says that's not enough.

"The World Cup involves not only stadiums. There are fans coming from the four corners of the world who will be concerned by the heat,” he added.

"The first incident putting a life in danger will be subject to an investigation. Nobody at the Fifa executive committee wants to be responsible for that," Zwanziger said.

A Fifa spokesman told AFP that "As Mr Zwanziger himself says, it's his personal opinion."

Hassan al-Thawadi, the secretary-general of the Qatar 2022 organizing committee told Die Welt newspaper that he was "sure that the 2022 World cup would take place in Qatar."

He added: "There's no basis to lose the World Cup."

The weather was just one of many things to create outcry from football fans when Qatar was awarded hosting duties in 2010.

A corruption investigation into the awarding of the bids of the 2018 games to Russia and the 2022 games to Qatar, both announced in 2010, will be ruled on in November, announced the German judge hired by Fifa to rule on the report.

But the report will remain secret.

Michael Garcia, the US lawyer who spent the last two years on the investigation into Fifa for Fifa, turned in his 430-page report last week.

The judge, who will rule on the report, Hans-Joachim Eckert, said at an ethics in sports conference on Friday that he hoped to deliver verdicts resulting from the report in November.

But Eckert also said that the report would not be publicly released.

"You cannot expect for anything to be disclosed from this report to the public," he said. "There is an obligation for privacy and we will comply with this."

Eckert will be able to pose sanctions against Fifa executive committee members who voted in the December 2010 hosting decision. His power over bidding candidates is unclear.

It had previously been reported that the Qatari Fifa official, Mohammed Bin Hamman paid former Fifa vice president Jack Warner €1.54 million prior to the vote. Both have denied this.

The son of Fifa official and Uefa president Michel Platini was also offered a job at a Qatar sports company after Qatar won the bid.

According to the Independent, Garcia's investigation has cost Fifa €7.6 million.

A serfdom of foreign workers

Qatar's use of migrant workers has also brought the football governing body's choice of host under fire.

An estimated 1.7 million migrant workers are in the country, making up 88 percent of the population. A report by the Guardian last year exposed the local Kafala system to be no better than serfdom, where workers' rights are tied to their employer.

The report found that Nepalese workers brought into the country are dying at a rate of almost one a day.

Many also reported not being paid for months at a time or being paid lower wages than promised, as well as being denied water while working in the desert conditions.

Employers often confiscated passports and denied the migrants their working papers, reducing them to the status of undocumented and illegal workers.

A German filmmaker was arrested last year while trying to document the reported conditions. Meanwhile, back at the ranch

Last week, the Fifa ethics committee told the organization's executives that they had until October 24th to return a €25,000 watch gifted to them by the Brazilian national football organisation, the CBF.

Fifa rules state that all executives must report gifts of value.

Zwanziger claimed he only realized he was in possession of the watch after being questioned by the press about it.

Current DFB president, and Zwanziger's successor, Wolfgang Niersbach had already sent the watch back to Brazil by courier, according to a report by Der Spiegel.

CFB should be punished for the gaffe, said Zwanziger.