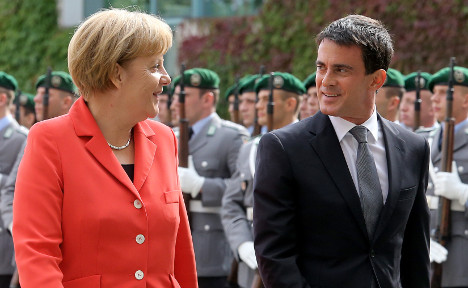 Merkel and Valls on Monday in Berlin. Photo: DPA

Merkel's praise for the recently reshuffled French government's plans was guarded, as she insisted that “we have to stick to what we have agreed amongst ourselves,” in a reference to the European Stability and Growth Pact.

Merkel said reforms are not an end in themselves but necessary to raise living standards and jobs, and that their success in France would be judged not by Berlin but by the European Commission.

“France will certainly live up to its responsibilities,” the French PM responded, although he accepted that Germans had reason to doubt his country's commitment to reforms.

"Germany loves France when it sticks to its commitments, and France loves Germany when it knows how to understand France," Valls said.

Paris has demanded Germany, Europe's biggest economy, do more to promote growth and investment in the ailing Eurozone.

Merkel, however, said that there are "plenty of opportunities to create growth without spending extra money".

Valls has come in for a mixed reception from German politicians. Members of the SPD have held back from criticizing their socialist sister party, but members of Merkel's Christian Democratic Union (CDU) welcomed him with harsh words.

“I expect that the new French government should finally seriously reduce the budget deficit,” CDU politician Andreas Schockenhoff, president of the France-Germany friendship group in the Bundestag, told Spiegel.

France has been the object of European criticism this year as it now expects to miss the Eurozone three percent deficit target in 2015 and 2016. Valls, a member of France's ruling Socialist Party (PS), will spend Monday and Tuesday in Germany and has meetings planned with the Chancellor, Vice-Chancellor and SPD leader Sigmar Gabriel, and German industrial leaders.

The French PM will also make stops in Hamburg, where he will visit a factory belonging to Franco-German company Airbus, and Stuttgart on his trip.

The German economy, which has an unemployment rate almost half of France's 10.4 percent and with growth forecasts almost twice as large (1.8 percent against 1.0 percent in 2014), is looked on with envy by its western neighbour.

However, the French Socialists are resistant to the idea of adopting German-inspired austerity and left-wingers have accused Merkel of forcing other European countries to cripple their own economies.