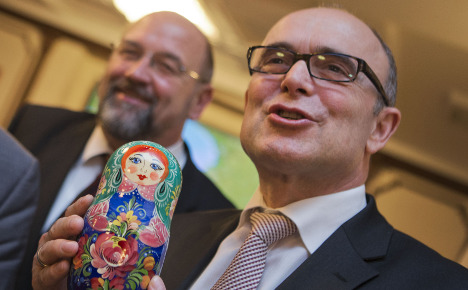 “It's in the interest of our state to build up our economic relationships with Russia further,” Mecklenburg-Western Pomerania state premier Erwin Sellering said of the planned event in Rostock from September 30th to October 1st.

“I think the event is the right signal even in the current situation.”

He added lots of firms in the region had shown interest in doing business with Russia despite mutually-applied sanctions banning the import of certain types of food from the EU. Russia is the state's biggest trading partner.

The Social Democrat (SPD) premier of the north-eastern state was responding to criticism of his state's policy that has mounted as the date of the “Russia Day” approaches.

He has been called a “Putin sympathizer” by fellow politicians and media commentators for sticking to the plans, while Germany and Russia are at odds over the Ukraine crisis.

But he dismissed those calling him a "Putin Versteher" – a German term for those who are sympathetic towards Putin's policies – in a pugnacious interview with the Welt newspaper last week.

“The stupidest contributors to this crisis are those who speak dismissively of people who try to understand Putin. It's the so-called Putin sympathisers who are trying to find a way out of this crisis,” Sellering argued.

“My experiences enable me to judge in this matter,” he continued in the most striking section of the interview.

“I learned that in a conflict no-one is 100 percent in the right. You only find common ground when you try to take the interests of your counterpart seriously… you can't speak eye-to-eye unless you understand what's going on inside the other person.”

While mutually applied sanctions are already hitting the balance sheets of Russian banks and German farmers, Sellering said it was important to maintain economic lines of communication.

“It's important to keep conversations going, even in tough times,” he said. “A regional business meeting like this can be a small contribution to that.”

Former German Chancellor Gerhard Schröder (SPD) is also scheduled to take part in the Russia Day, and the state premier leans on his example as someone who “managed to build up a relationship of partnership with Russia”.

Schröder joined the board of Russian energy giant Gazprom after leaving office and was criticized in April for celebrating his 70th birthday in St Petersburg with Russia President Vladimir Putin.

He has also defended Russia's response to the Ukraine crisis.

But the feeling that good relations with Russia shouldn't be sacrificed over Ukraine isn't restricted to left-wing politicians in Germany.

The right-wing anti-euro party Alternative for Germany (AfD) also contains "Putin Versteher" among its ranks. Two of its politicians in the European Parliament – Beatrix von Storch and Marcus Pretzell – voted against Ukraine's association agreement with the European Union on Tuesday.