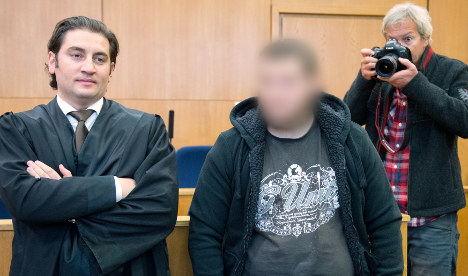 Kreshnik Berisha in court in Frankfurt on Monday. Photo: DPA

In the first German criminal proceedings involving IS, Kreshnik Berisha, a 20-year-old born near the business capital Frankfurt to a family from Kosovo, has been charged with membership of a foreign terrorist organisation.

In a Skype conversation with his sister from November last year, presented to the court Berisha wrote: "I'm chilling, fighting, doing my job for Allah."

He could face 10 years in prison if convicted by the city's superior regional court.

However, presiding judges proposed a deal as the trial opened in which Berisha would get a lighter sentence in exchange for a full confession. Defence lawyers said they would respond to the offer by Friday.
The heavy-set Berisha, wearing a full beard, a black T-shirt, hoodie and grey sweatpants, sat impassively as proceedings began.
The trial is taking place under tight security amid a Western crackdown on IS over the threat posed by citizens returning home from Syria and Iraq, where they have gained weapons training and combat experience.
Berisha, who reportedly belonged to a local Jewish football club in his youth, is believed to have become radicalised when he fell in with a group of Muslim fundamentalists while on a job training programme.
Federal prosecutors say Berisha travelled to Syria via Turkey in July 2013 with other Islamists planning to join the fighting to create an Islamist "caliphate" straddling Syria and Iraq. "He wanted to take part in building a theocracy under Sharia law," prosecutor Horst Salzmann told the court. "He gave an oath. He was ready to die for their goals."
Soon after his arrival, Berisha allegedly underwent firearms training and was put to work as a medic and a guard.
In the six months he spent in Syria, he is believed to have fought in at least three battles on the side of the jihadists against President Bashar al-Assad's troops.
He returned home for reasons that are unclear to German authorities in December 2013 and was arrested at Frankfurt airport.
Prosecutors say there is no evidence he was plotting an attack in Germany.
A verdict is not expected before mid-November.

'Not a dangerous person'

The judges hearing the case said they had held talks before the trial with the defence and the prosecution about a shorter jail sentence of between three years and three months and four years and four months.
In exchange, Berisha would confess to the charges against him and deliver detailed responses to questions about IS's inner workings.
Defence attorney Mutlu Gunal, who said his client would reply to the offer by Friday, insisted that Berisha was "grateful" to be back in Germany.
"The fact that he returned of his own accord shows he turned his back (on IS)," he said, adding that he believed Berisha suffered from post-traumatic stress disorder from his experiences in Syria.
"I can assure you – this is not a dangerous person."
Authorities estimate around 400 German nationals have travelled to Iraq and Syria to battle for the militants.
Interior Minister Thomas de Maizière announced on Friday that Germany had outlawed active support of Islamic State including the recruitment of fighters and social media propaganda.
"We must prevent radical Islamists bringing their jihad to our cities," he said.
Germany has launched 140 criminal probes against alleged IS fighters or supporters, news weekly Der Spiegel reported Monday.
SEE ALSO: Germany officially bans terror group Isis