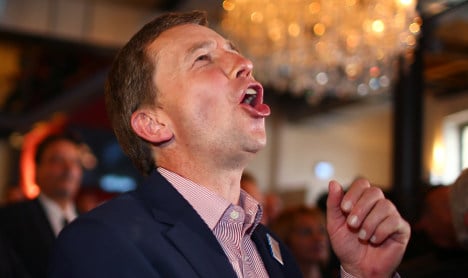 "We are the force that's renewing the political landscape," said a jubilant Bernd Lucke, leader of the Alternative for Germany (AfD), which wants Europe's biggest economy to scrap the euro and return to the Deutschmark currency.

"One can't deny it anymore: the citizens are thirsting for political change," said the economics professor, cheered on by applauding supporters in Potsdam, the state capital of Brandenburg.
His nascent party, which was only formed early last year, gained 10 percent in Thuringia state and 12 percent in Brandenburg, said preliminary results, two weeks after the AfD also entered parliament in the eastern state of Saxony with almost 10 percent.
Analysts had predicted the AfD would draw much of the protest vote in the former East Germany, which still lags western states in wealth, jobs and wages 25 years after the Berlin Wall fell.
Michael Wohlgemuth, director of think-tank Open Europe Berlin, said the AfD were now drawing support from across the political and social spectrum.
"People want to voice their discontent," he told The Local. "The AfD has used  a mix of topics to draw support, from fears of immigration to family values, and it has worked well with voters coming from the left and the right.
"It is a problem for Merkel that will not disappear soon. She has left some room on the right both in terms of economic and social policy. The AfD are likely to make it into many more states."
The results give a political toehold to the party which only narrowly missed out on entering the national parliament last September and won seven seats in European Parliament elections in May.
PHOTO GALLERY: Election night in Brandenburg and Thuringia

The AfD denies seeking hardline right-wing voters, but flirts with populist ideas on issues such as law and order, immigration and traditional social values.
Among its demands are a referendum that would seek to block plans to build a mosque in the eastern city of Dresden.
"Their protest draws on threat scenarios, be it refugee boats on the Mediterranean, Brussels bureaucrats or criminals at Germany's eastern borders," said the Frankfurter Allgemeine Zeitung.

Merkel, worried about the AfD's growing ballot box appeal, this week said that "we must address the problems that concern the people" including "crime and rising numbers of asylum seekers".
Analysts say the AfD, which sits in the European Parliament in the same group as the British Conservatives, has positioned itself to the right of Merkel's Christian Democrats (CDU) while keeping its distance from the far-right fringe.
Political scientist Werner Patzelt of Dresden Technical University said "the CDU is now well advised to keep its nerve".
"It remains to be seen whether the AfD turns out, in parliamentary practice, to be a flash in the pan or whether it proves itself in the political process without allowing itself to be hijacked by right-wing populists and far-right extremists".
Patzelt said the AfD's central theme – railing against eurozone bailouts and an emerging EU "super state" – is unlikely to go away soon and that such fears are mirrored in other European countries.
CDU general secretary Peter Tauber said in a tweet that "we don't see the AfD as a partner".
Finance Minister Wolfgang Schäuble earlier dismissed the AfD as populists who offer simple slogans that appeal to disgruntled citizens.
"I just call them demagogues," said Schaeuble. "You can't shape the future with them."

Another party that made gains in Thuringia was the far-left Linke party, which groups former eastern Communists and anti-capitalists.
It scored about 28 percent in Thuringia – second only to the CDU's roughly 34 percent – potentially giving it a shot at power in a three-party coalition government there for the first time since German reunification.
A tie-up between the Linke, Social Democrats (SPD) and the Greens was possible – but so was an alliance between CDU and the SPD, leaving the door open to days of haggling to form a government.
A "red-red-green" government would be the first in Germany where the far-left party would be the senior partner – a threat that has led Merkel to warn that "Karl Marx would return" to the state government.
So far the SPD has rejected a national level tie-up with the Linke, whose policy positions include a basic salary for everybody, a ban on any German military missions abroad and the dissolution of NATO.
The SPD, meanwhile, easily cruised to victory in Brandenburg, the state that encircles Berlin, which has been a Social Democratic bastion for 24 years.
SEE ALSO: Anti-euro party debut in state parliament