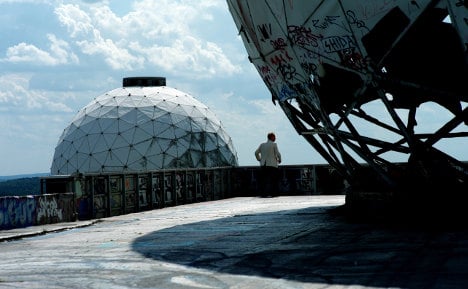 On top of Teufelsberg. Photo: DPA

As Berlin-fever lures tourists to the German capital year round, the masses are also hitting up some unlikely places, like Teufelsberg, the former top-secret military facility erected by the Western Allies during the Cold War.

Often seen as one of Berlin’s “best abandoned sites,” Teufelsberg has been a destination for adventuresome types seeking a secret mission of their own.

Since its closure in the early 1990s, hordes of Berliners and out-of-towers risked the trespassing fine and illegally slipped through the fence to explore. Some took photos and others drank beers high in the antenna tower, watching the sunset over Grünewald forest.

But the old days of sneaking in are over. In 2012, a Cologne investment company which owns the site, handed it over to the current tenant, Shalmon Abraham. Troubled by the danger the site posed – and its development purgatory – Abraham decided to let the people in, this time legally.

With the help of volunteers and the Association of Berlin Teufelsberg, the former field station has been cleaned up and transformed into an all-out tourist attraction, offering historical and sightseeing tours seven days a week for €15 per head.

Abraham organizes the tours. He also rents out the site for photo shoots, filming and special events, and invites graffiti and street artists to use it as a canvas. There’s even an urban gardening project sprouting up around the derelict premises.

49 years in a Communist sea

On a humid Sunday afternoon, tour guide Chris McLarren stands on the second floor of the Teufelsberg listening station, in what was once his office. What remains is a concrete floor with no with exterior walls, only graffiti-covered slabs that once divided the space into separate rooms.

“We have something that graffiti artists love – we have lots of walls,” McLarren tells his tour group of around 30. “What you see here is art by people that we know, people that we invite to come here and use the walls. Every Sunday I come here to give tours, there’s something new.”

Between 1973 and 1975 McLarren was employed by the US Army Security Agency at the Teufelsberg. Its purpose was to listen to the military traffic of the Soviets, East Germans, and other Warsaw Pact nations. McLarren and his team served as signals intelligence analysts in the American sector.

He emphasizes that during the Cold War, relations between the British, French and Americans were good.

“We were together for 49 years in a Communist sea,” he explains. His stories of top-secret missions and espionage are captivating – and he’s the perfect person to tell it. He knows the way through what is now a dilapidated ruin.

‘In memory of those who served’

The first stop on our tour is the military police offices, which were divided into the British and American departments. We take the British hallway.

It’s dark and damp with low ceilings and naked light bulbs to guide the way. McLarren jokes that the lightning was always dim.

“In memory of those who served at T-berg” is sprayed-painted in black. The office space is literally torn to shreds – broken ceiling tiles dangle downwards, and gaping trenches are left where thieves stripped out the copper cables.

Over in the American sector, the elevator is completely dilapidated, so McLarren leads us up the stairs to explore the various levels of the central tower. The white domes that once covered the antennas are now tatters of shredded fabric that flap in the wind.

Ato, a young history major in Berlin, says he came to Teufelsberg years ago, for an “underground” electronic music festival. His older brother, Jakob, is a physicist.

“In our family, we have a lot of architects, so there’s an inherent interest in older buildings in connection with history,” explains Jakob.

“What is especially interesting are places that go through transition, because you can start your own fantasy about what’s going to happen with it. And when you’re in buildings that are changing, you also feel a part of its history. So I think Teufelsberg expresses that,” he adds.

A hill of rubble

Teufelsberg is no stranger to transition. The original site was used for a never-completed Nazi military technical school. After World War II, the hill that is Teufelsberg was erected from approximately 75,000,000 cubic meters of collected rubble from Berlin.

In the late 1950s, the NSA built the field station on the plateau of the hill, where it operated before closing in 1991.

McLarren has been living in Berlin since his posting at Teufelsberg. And 36 years after he left the station, he starting doing tours every Sunday.

For him, it’s all a bit surreal. “When most people left here, it was like shutting a window. It was all finished, and in most cases they went on with their lives. I never expected to come back here.”

But there are some special moments. On the top floor of the highest antenna tower the acoustics are very vivid, sending voices in all directions. McLarren encourages his guests to sing, and leads the group in a “do re, mi, fa, sol, la, ti do” that rings out in an echoing chorus.

The ideas of what to do next with Teufelsberg have ranged from gated community to luxury hotels and lofts, a car park, a spy museum, and a university for Transcendental Meditation, backed by filmmaker David Lynch – none of these proposals even got close to fruition.

“Some people want to level it and make it forest again, others want to rebuild it. The problem is nobody has any money,” explains McLarren. Even the investor IGTB has its hands tied. Tearing it down would be too costly, and as the hilltop is categorized as forest in the land use plan of Berlin, building on the site is simply not possible.

“The only people who could buy it and do something is the city [council], but Berlin has no money and no interest. After all, we must build our airport,” laughs McLarren.

In the last 12 months, with the NSA spying scandal in the headlines, the number of tourists has increased by 30 to 40 percent. “They’ll never exhaust the pool of people that like to come and visit Teufelsberg,” says McLarren.

About half of visitors are Berliners, and the rest come from across the globe. “Some foreigners have Teufelsberg very high on their list of things they want to visit in the city," McLarren adds. “There’s something special about the place, like all secret places.”