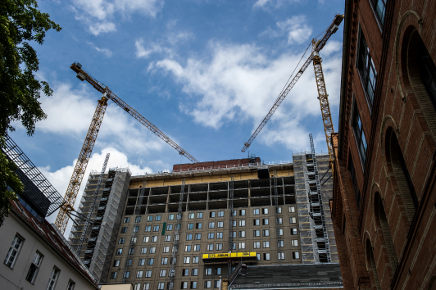 The cranes at Charité Hospital where the man has sat since Thursday night: Photo: DPA
Police cordoned off part of the central Charité hospital early Friday after the 39-year-old man occupied the cabin of a 125-metre building crane overlooking the area during the night.
Around 100 police officers were deployed at the scene amid initial reports that he was carrying a firearm and possibly a hand grenade.
After a twelve-hour stand-off and talks with negotiators and doctors, he came down from the crane at around midday and surrendered to police.
The man was found to be unarmed and handed over to mental health workers, a police spokesman told The Local, adding, "He is known to us".
Crane and roof regular
Tagesspiegel newspaper said that the man, Kai Q., had already performed similar stunts all over Germany and earned himself the nickname "Crane Kai" in police circles. He has several convictions already, including for breaking and entering and theft.
In 2002, he triggered another long stand-off after pulling a pistol from his rucksack during a failed robbery.
And in 2006 he triggered an armed response unit deployment after climbing onto a crane in the Brandenburg town of Neuruppin and another police deployment around a crane on Berlin's Schlossplatz.
He told Berliner Kurier newspaper at the time that his actions were triggered by his unhappy love life and said that he had tried to commit suicide several times.
The man has a history of psychiatric disorder and has been previously treated at the Charité hospital. Eight years ago he also climbed onto its roof and threatened to jump, according to press reports.
In his latest ascent, he climbed the crane at Charité around ten p.m. on Thursday. Using binoculars to track police activities below, he also threatened to throw himself off the crane if anyone tried to reach him.
Several streets were cordoned off, causing traffic chaos in the area. Police also kept a primary school in the area closed as a further precaution.