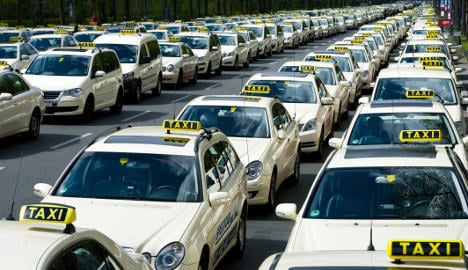 Taxis are a powerful trade lobby in Germany. Photo: DPA

“We will attack this judgement and defend our rights vigorously,” an Uber spokesman said.

Uber's representatives were not present for a hearing before the ban was brought into effect, but it is nevertheless effective until the beginning of a normal trial.

The Frankfurt court accused the San Francisco-based company of unfair competition and said that it had imposed the ban because of the danger the infringement would recur. Uber had not responded when the court sent it a written warning.

Uber had planned to contest the ban and continue operating until the court arrived at a final decision.

“We believe competition is good for everyone,” the company said in a statement. “There's a reason why Germany has become Uber's fastest-growing market.”

Less than a week ago, Uber celebrated as a court in Hamburg overturned a citywide ban on the service – after a similar case brought against it by taxi drivers – and was in the midst of planning an expansion to Stuttgart and Cologne.

The company has made headlines throughout this year as its service, which allows drivers and passengers to connect with a smartphone app, has put the squeeze on taxi drivers.

They say that Uber is able to offer a cheaper service because it doesn't follow German regulations on carrying passengers.

The law only permits carrying passengers if certain standards are met, said Dieter Schlenker, president of the Germany Taxi Association.

“No passenger can check the driver, company and vehicle” for himself, Schlenker said. The industry's principal arguments against Uber are that passengers aren't adequately insured, that its drivers don't have to pass health checks and that vehicles are not checked for safety.

Germany Taxi Service Company (TDS) is the plaintiff in the Frankfurt case. It offers its own competing smartphone app.