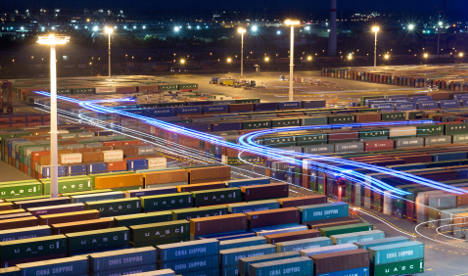 Germany isn't sending as many goods abroad as at the beginning of the year. Photo: DPA

The statisticians said that the drop was due to exports falling below the level of imports, with worldwide crises hitting Germany's balance of trade.

Less money was also being channeled towards investment, with construction projects seeing an especially large reduction.

However, federal, regional and municipal budgets showed a combined surplus of €16.1 billion – 1.1 percent of GDP – in the period from January to June, profiting primarily from a "very favourable employment situation," Destatis said.

Aside from these slowing effects, however, consumption by private households and public spending went up compared with the previous quarter.

And the strong first quarter this year meant that the economy was still 0.8 percent larger in June than it had been in the second half of 2013.

Under eurozone rules, member states are not allowed to run up deficit ratios of more than 3.0 percent and are obliged to bring their budgets into balance or even surplus in the long term.

The federal government alone achieved a surplus of 4.0 billion euros in the January-June period, the first time since 1991 that the federal budget has been in the black in the first half, Destatis said.

The regional states were able to almost balance their books as well, running up a deficit of just €200 million, compared with a surplus of €1.3 billion in the same period a year earlier.

Overall public sector income amounted to €636.9 billion in the first half, an increase of €21.2 billion or 3.4 percent compared with a year earlier.