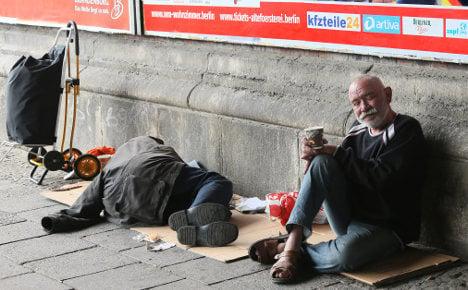 The research by the Germany Economy Institute of Cologne (IW) shows that the largest concentrations of poverty are in Germany's largest cities, regardless of which state researchers looked at.

By studying relative purchasing power, rather than people's absolute incomes, the researchers found that the low cost of living in eastern states reduced the incidence of poverty. Prices are on average seven percent lower in the East than the West.

This meant that while the average poverty threshold for the whole country was an income of €870 a month, someone living in Munich on less than €1,030 a month could be considered poor.

Based on this relative study, easterly Thüringen has the third-lowest number of people living in poverty of the 16 states.

However, there was a big difference between people living in the countryside and the cities with 22 percent of town dwellers living in poverty compared with 14 percent of people in rural areas, the study found.

Cologne was the city with the highest rate of relative poverty rate at over 26 percent. But it was closely followed by other cities, including Dortmund (25.5 percent), inner city Berlin (24.5 percent) and Bremerhaven (24.3 percent).

The poverty rate rose by 2.5 percent between 2006 and 2012 in urban areas, while remaining stable in the countryside.

Across Germany, the groups that were hardest hit by purchasing power poverty were always the same: half of people in households with at least one unemployed person, a third of single parents and a quarter of people with an immigrant background.