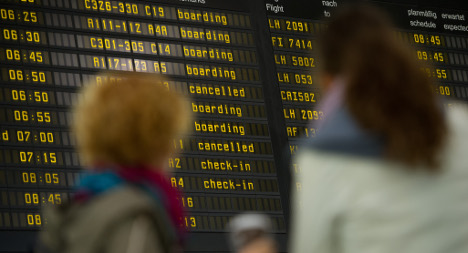 The strike ended on time despite a spokesman for the pilots' union raising the possibility of the action continuing into the weekend.

Aircraft out of position and delays could mean that the airline will cancel further flights in the afternoon.

Vereinigung Cockpit (VC) began the industrial action at 6am on Friday at all airports in the country used by Germanwings. It was due to last until midday.

The spokesman described the present action as "pinpricks" aimed at bringing management back to the negotiating table.

The worst-affected airports are Cologne and Stuttgart, but Düsseldorf, Berlin, Hanover, Hamburg and Dortmund have all seen flights cancelled.

At the Cologne/Bonn airport 32 of 50 scheduled flights were struck off departure boards, while at Stuttgart 22 of 36 were cancelled. The union had threatened strikes when it called off talks last Friday with Lufthansa and made good on the threat after last-ditch talks with Lufthansa  ended without agreement on Thursday.
The dispute centres on the pension arrangements of 5,400 pilots at Lufthansa and Germanwings.

Lufthansa wants to raise the retirement age for its pilots from 59 to 65, while the union wants Lufthansa to keep paying transition money to those who retire before 65.

The disagreement led to a three-day strike in April which grounded 3,800 flights and affected 425,000 passengers.

After the April strike, negotiations started again but broke down last Friday.

The union said in a statement: "We regret any inconvenience to the customers of Germanwings."
Lufthansa said it "very much regrets this strike announcement and particularly the inconvenience it will cause Germanwings customers".

The airline said it was "looking into what impact the strikes will have on the talks with the union".
It could not yet say how exactly many flights would be affected, Lufthansa added.
SEE ALSO: 'Too short' would-be pilot sues Lufthansa