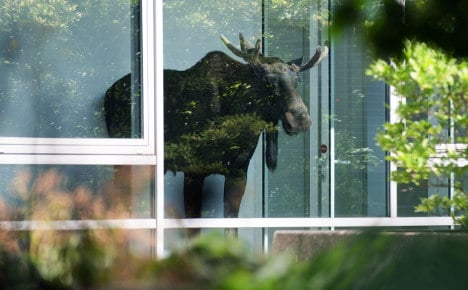 The young bull elk trapped in a Dresden office. Photo:DPA

The elk, which has been spotted several times in the Dresden area during the weekend, had been grazing nearby when he was startled by a group of onlookers and police and fled.

“This is a sign of panic,” said a press spokesman for forest management company Sachsenforst. “He doesn't know where to go any more.”

After five hours in the office block the animal was anesthetized, loaded into a container and taken away on Monday afternoon. He was released in eastern Saxony.

Trapped between the glass panes of the building and an interior wall, the unusual sight of the elk has drawn crowds to the building, although the grounds around it were blocked off by police. Others are watching from the upper floors of the office block.

Young elks occasionally wander from Poland along old animal tracks towards Dresden, with the last one being spotted several years ago. They are driven to leave their homes when the older generation have new children and reorganize their family groups.

Sightings have increased across Germany since the fall of the Iron Curtain, particularly in Brandenburg, Saxony and Bavaria.

Experts believe that more than ten elk live permanently in Germany and hope that the species will re-establish itself in the country's forests.

Elk can live up to 12 years and weigh up to 800 kilogrammes.