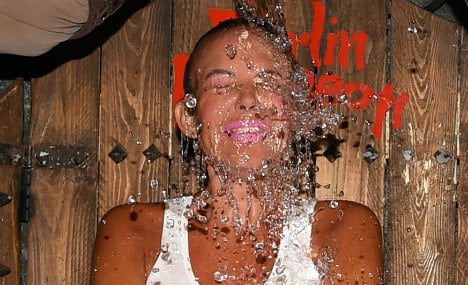 The ice bucket challenge began in the US and consists of a person pouring iced water over their head and then nominating others to do it.

If they do not take on the challenge they must donate to ALS (Amyotrophic lateral sclerosis) research and if they do, they are encouraged to donate anyway. The ice bucket challenge has quickly expended across social media and many famous Germans have participated in the hope to raise money and awareness for ALS, a disease that affects nerve cells in the brain and the spinal cord.

Across social media, Stefanie Giesinger, the most recent winner of Germany's Next Topmodel, schlager sweetheart Helene Fischer, tennis player Julia Görges, goalkeeper Manuel Neuer as well as several of his national teammates, and celebrity chef Steffen Henssler are among those to have taken the plunge.

Yvonne Weindel is a ALS patient and mother of three and although she said she likes the idea and thinks it's a fun campaign she can't help feeling that the hype will only last a while and then the feeling of being alone will come back. She questions what people actually know about the disease.

Nevertheless, she thinks it a nice and playful way of trying to raise awareness.

"It's a smart way of getting the attention of people who usually don't give a shit about it. Perhaps this is the right way. It's not about empathy or who's affected. It's just funny and in my life there are still funny moments," she told German news agency dpa.

In Germany, between 4,000 and 6,000 people suffer from the disease said Horst Ganter the executive director of German Community for Muscle Illnesses (DGM).

However, his organisation has yet to see any results from all the publicity, Ganter told Der Westen daily newspaper. According to their report, the ice bucket challenge has brought in €3,500 in donations. Their annual intake is €600,000. Although, he concedes it is a significant raise from the same month last year.

Chancellor Angela Merkel was nominated by a Berlin handball player, but her rep on Twitter declined to comment, saying: "I beg your understanding, but we do not report how the Chancellor makes donations from her personal money."

However, comedian Oliver Pocher took the challenge on her behalf.

It is yet early days for the ice bucket challenge so perhaps more is to come. On Thursday evening, Mario Götze and Marco Reus announced they would be donating for ALS research through the German association DGM instead of the American association.

Famous Germans who have died of ALS include artist Jörg Immerndorf (2007) and Bundesliga player Krzysztof Nowak (2005).