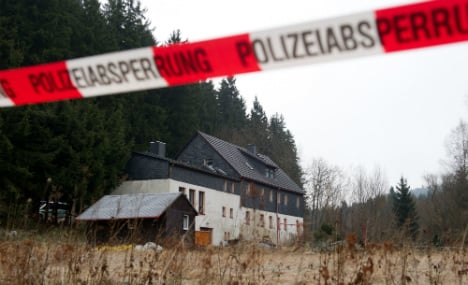 The scene of the crime. Photo: DPA

In a macabre case that captured global attention, prosecutors say the 56-year-old defendant, Detlef G., killed the man at his home last

November, then cut his body into small pieces and buried them in his garden.

The dead man, 59-year-old Polish-born Wojciech Stempniewicz, had met Detlef G. the month before on a website where users share slaughter and cannibalism fantasies.

A click on a dialogue box allows participants to say if they would like totake their experiences beyond the realm of the imagination.

The indictment against Detlef G. cites "satisfaction of sexual lust" as a motive for the killing, but there is no evidence that the suspect ate any part of the victim.

"He wanted to kill the man and cut him to pieces," prosecutor's office spokesman Lorenz Haase said.

The accused is a three-decade veteran of the police force, the father of an adult daughter, and had been married to his male partner in a civil union for a decade at the time of the killing.

His partner, neighbours and colleagues have told investigators they were shocked to learn of his double life.

Detlef G. could face 15 years in prison if convicted on charges of murder and "disturbing the peace of the dead" by the Dresden regional court.

His defence team says Detlef G. has retracted part of an initial confession in which he said he killed Stempniewicz with a knife stab to the throat.

A graphic 50-minute video showing the dismemberment is to be presented during the trial, which is scheduled to last at least until November and hear around 20 witnesses including Detlef G.'s now estranged life partner.

But defence attorney Endrik Wilhelm says the recording proves that the dead man committed suicide by hanging himself.

A pathology report indicates he died from asphyxiation.

The men came across each other in October 2013 in an Internet chatroom for cannibalism fetishists billed as "the #1 site for exotic meat" and boasting more than 3,000 registered members.

Stempniewicz, a business consultant living in the northern city of Hannover, and Detlef G. had extensive contact via email, text message and telephone before finally arranging the fatal date on November 4.

Detlef G. picked him up at Dresden's main railway station and drove him back to his house in the Saxon town of Hartmannsdorf-Reichenau, which he ran as a bed and breakfast.

A video the accused made a few hours later reportedly shows a man in boxer shorts dismembering the naked body of a man suspended from a hook whose mouth was taped shut, his hands bound behind his back.

At one point, the man with the knife stops to listen for a heartbeat before continuing to cut.

Wilhelm says that Detlef G. is haunted by the events of that afternoon.

"In the last scene of the video, he says something like 'I cannot believe what just happened,'" Wilhelm said, adding that while the defendant harboured extreme fantasies, "he couldn't kill someone".

Detlef G. pointed investigators to the sites where he buried the remains. The genitals, however, are still missing, according to local media.

The case has revived memories of German cannibal Armin Meiwes who admitted to killing, mutilating and eating the flesh of a lover in 2001 whom he had met on the Internet via an advertisement looking for a "slaughter victim".

He was sentenced to life imprisonment in 2006.

The case exposed a murky underworld of violent fetish websites in which volunteers find partners to share dismemberment and cannibalism fantasies and, in extremely rare cases, act them out in real life.