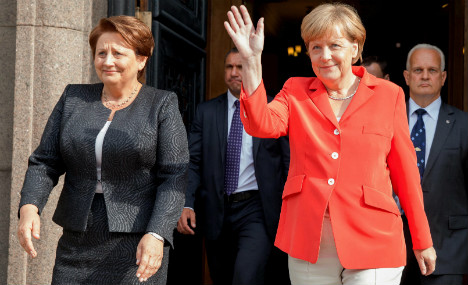 "The visit is planned for the day before Ukraine's national holiday" on August 24, Klimkin told journalists, adding that the visit by the German leader would be "very interesting".

The trip comes on the heels of the Merkel's trip to the Baltic state of Latvia, where she assured her NATO allies, including Lithuania and Estonia, that Russian aggression against member states would nnot be tolerated by the Atlantic alliance.

"I understand the concerns of the population of Latvia, but also in the other Baltic states and Poland," Merkel said in Riga on Monday, adding that Germany is ready to meet its obligations to secure the citizens of the former Soviet states.

"That is our duty and we will fulfil our duty," she added. However, the Chancellor also rejected the possibility of establishing permanent NATO bases in the Baltic region.

The Russian annexation of Crimea has been a cause of concern for its neighbours.

"The Russian advancement has fundamentally changed the security landscape of Europe," said Latvian Prime Minister Laimdota Straujama. "We have to send a clear response to Russia."

Merkel also discussed the need for Russian aggression to become the topic of discussion at September's NATO Summit in the UK, stressing that the alliance must have a "much stronger presence" in eastern Europe than they've had in recent years.

NATO had announced over the weekend that any Russian entry into a member state would be met with force.