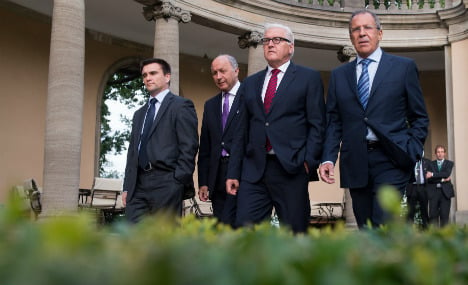 "Difficult talks, but I think and I hope that we have made some progress oncertain points," Germany's Foreign Minister Frank-Walter Steinmeier said after a five-hour meeting with Russia's Sergei Lavrov, Ukraine's Pavlo Klimkin and French counterpart Laurent Fabius.

"Despite the difficult climate, we have registered some progress," a French diplomatic source confirmed to AFP.

The nature of the progress was not disclosed by either Steinmeier or the French source.

The meeting's participants will report back to their respective heads ofgovernment and "possibly decide on Monday or Tuesday in which form we canresume today's discussion", Steinmeier said.

He stressed the need to avoid "sliding ever deeper into a direct confrontation between Ukrainian and Russian armed forces".

"It was a necessary conversation during a difficult time," Steinmeier told journalists after midnight local time at the talks venue, a lakeside retreat on the outskirts of Berlin, after his counterparts had left in their motorcades.

The top German diplomat said the talks were "frank", focused on ways to reach a ceasefire and on "how to improve the still absent efficient border controls on the Russian-Ukrainian border", as well as how to get humanitarian aid to the civilian population.

Fighting between Ukraine forces and pro-Russian separatists continued in east Ukraine on Sunday, doing little to assuage the fears of directRussian-Ukrainian confrontation.

Ukraine also ramped up the stakes before the talks in Germany by alleging another military convoy that included three Grad rocket systems crossed over from Russia.

The fresh claims come as a furore still swirls over Kiev's earlier boasts that it destroyed part of a Russian armoured convoy which breached the frontier Thursday.

Moscow again denied claims it had sent weapons across the border to prop up the flagging separatist rebellion.

The United Nations says more than 285,000 people have fled the fighting in the east.