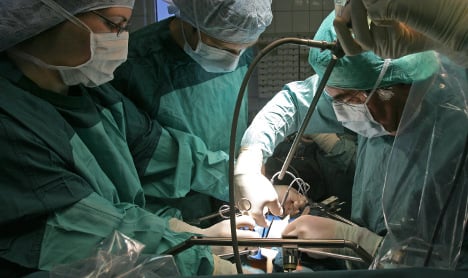 In the first six months of this year, there have been 513 organ donations, causing concern at the German Organ Transplant Foundation (DFO) that this year's total number could be even lower. The same period in 2013 saw 548 donors.

A spokesperson for the DFO told The Local that while there could be other reasons for the drop in organ donors, such as improved treatments that mean potential donors are surviving health crises, it wasn't enough to account for the 15- percent decrease.

A survey done by the DFO in 2013 also showed that 60 percent of respondents were wary of malpractice in the organ donor system, following the 2012 scandal at a hospital in Göttingen in Lower Saxony

The reports of the current organ shortages come almost one year after the start of the trial the former chief of transplant surgery at Göttingen University Hospital. Identified only as Aiman O., the doctor allegedly manipulated his patients' medical data to get them faster access to donated livers at the expense of others.

The defendant is accused of 11 counts of attempted manslaughter, since the list-jumping almost caused the deaths of others waiting for replacement organs.

He has denied all charges and his defence has for the past year rejected the charges as absurd. More than 70 witnesses have testified during 40 days of hearings.

Germany made extensive changes to organ donation laws as a result of the ensuing outcry. A supervising board has also been created to monitor the patient waiting list and ensure the neediest are the first to receive. Doctors found to be manipulating the list are subject to hefty fines or up to two years imprisonment. Donors are either self-declared verbally or in writing or through an organ donor ID card. If no declaration has been made, family members are asked to make the decision on behalf of the potential organ donor.

Of the 10,700 patients currently waiting in line for transplants, 7,600 need a replacement kidney. A liver is the second-most needed organ, with 1,370 people requiring a transplant operation to live.