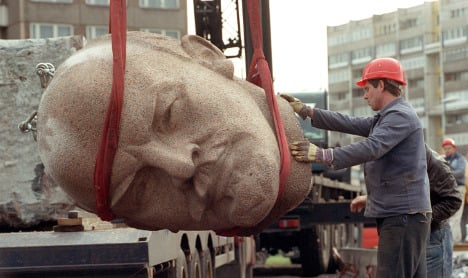 Have you seen this head? Photo: DPA

Due to open in the spring, “Unveiled. Berlin and its monuments“ will incorporate 100 original exhibits dating to the era of the Kaiser's Empire, the Weimar Republic, the National Socialist period and the former East Germany.

The Lenin head cut from red Ukrainian granite was to be a focal point of the event – but it has now been reported missing.
Its last known location was in the Köpenick Forest on the southwest edge of Berlin, where it was buried with 128 more pieces of the 19-metre statue, which was dismantled after the collapse of Soviet Union in 1991. The city government is not willing to undertake the search.

To find it again would take “extensive probing and exploratory excavations” that the city is not in a position to undertake financially, technically, or in time for the exhibition's spring opening, said Berlin's top official for the protection of monuments, Jörg Haspel.

It would also take too much work and expense to sufficiently restore once found, he told the newspaper. Furthermore, his department had decided that while the monument's location was supposedly not known, its dismembered parts should all remain together.

The organizers of the exhibition were nonplussed by the news that Russian revolutionary's head will be absent from the line-up.

“I am bitterly disappointed that we are only now hearing about this decision and that this central object cannot be displayed in the exhibition,” said Andrea Theissen, the head of the Spandau’s office for art.

The event has received €14 million funding from the Brandenburg government, the EU and from lottery ticket sales.