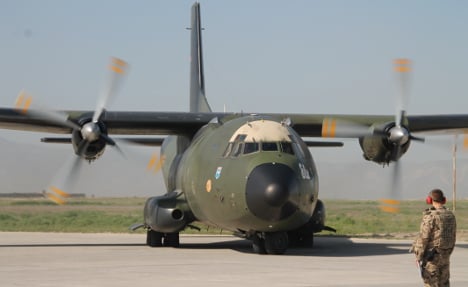 "Stopping the advance of these extremists and helping those in need is a task for the entire international community," she was quoted as saying by the Hannoversche Allgemeine Zeitung.

Merkel told a local newspaper that "the suffering of the people in northern Iraq, of the Yazidis, Christians and others, at the hands of the terror group Islamic State is appalling".

Germany, a major arms manufacturer, as a rule does not export weapons into war zones, but Merkel pointed out that German law allows for exceptions in cases that impact national security.

"When it comes to arms exports, the government always has some political and legal leeway, and if necessary we will exhaust it," said Merkel. "Here we will coordinate closely with our partners and, above all, with the United States."

She added that: "German security interests are a factor in our deliberations, but no decisions have been taken yet".

Four German Transall C-160 military transporters, carrying 36 tonnes of mostly medical and food supplies, will fly via Turkey to the Kurdish city of Arbil, the German defense ministry said in a statement on Thursday.

"The federal government has decided to provide rapid and effective humanitarian aid to people in need in the north of Iraq," it said.

Many prominent lawmakers in Germany have also called for the embattled Iraqi state and Kurdish forces to be provided weapons to help them push back the jihadist onslaught.

Germany, struggling with the legacy of its World War II aggression, has practised restraint in foreign military engagements and usually been reluctant to send troops or weapons into foreign war zones.

A poll by the Emnid institute conducted on Wednesday found that 71 percent of respondents opposed the idea of German arms shipments to Iraq, while 87 percent favoured sending humanitarian aid and 68 percent supported sending non-lethal military aid.